Close
He is very excited to have the opportunity to run and explode.

When summoned, he will chase down a plant by rolling on a bomb, and then attack a plant by exploding himself, dealing 20 to 50 damage to the plant. His attack is named Imp Explosion. All Exploding Imp variants have 12 health, making them the weakest zombie to date.

Exploding Imps and Exploding Imp Fans return, and are the same as in the 1st game. Contrary to popular belief, the Exploding Imp Pirate returns in GW2 in Captain Smasher's Curse.

Exploding Imps reappear as zombies in Battle for Neighborville in some plant story missions.

He is very excited to have the opportunity to run and explode.

Although this is the weakest Spawnable Zombie, he is decent in damage. They are best used for distracting and/or damaging plants so you can finish them off more easily.

If you are in an elevated area that is only accessible by abilities such as Hyper or Super Pea Jump, you will not have to worry about this zombie reaching you. However, if you are not, then you should have somewhat of an expectation of them reaching you. If you suddenly encounter one that is close to you, try to shoot him as fast as you can. If you do not miss your shot, you have a high chance of vanquishing the zombie, as he has very low health.

Pirate version of the Exploding Imp 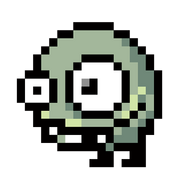