For other uses, see Explode-o-Nut (disambiguation).

Just save up Explode-o-nuts for waves of zombies.

Explodes like a Cherry Bomb when it touches the first zombie

N/A, First appears on Level 1-5
The Explode-o-nut is the explosive version of a Wall-nut. They will blow up the instant they touch a zombie. They are powerful enough to immediately destroy any zombie (except Gargantuar).
Explode-o-nut is an explosive version of the Wall-nut. Once it hits a zombie, they explode in a 3x3 area, similar to the area of a Cherry Bomb, dealing 1800 damage per shot to any zombie(s) caught in the blast.

In some versions of the game they can be obtained as a reward in most other levels for watching an ad, which behave the same as in the Wall-nut Bowling.

The "explode" part comes from the fact they explode on contact with zombies due to the nitroglycerin in their core.

Note: The following almanac entry was created using official text[1] from the Plants vs. Zombies: Sticker Album book and does not appear in-game.

Because of their 3x3 range, it is recommended to save them for huge waves or groups of zombies. They will blow up the instant they touch a zombie, so launch them in the middle of a horde, not the front. They are powerful enough to immediately destroy any zombie (except the Gargantuar and Zomboni; the latter takes damage from the explosion as one Wall-nut), making them great opponents for tougher zombies like the Buckethead Zombie, Screen Door Zombie, or Gargantuar.

To make full use of the explosion area, instead of rolling them at a group of zombies, wait until the group of zombies crosses the line far enough and plant one in the middle of them. Also, roll them on the second and fourth lanes when a flat wave of zombies comes, as they will instantly blow up large amounts of zombies on the screen (excluding Gargantuars and Zombonis). 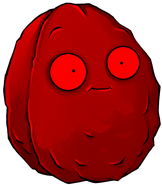 Full of Explode-o-nuts on the conveyor-belt 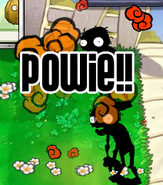 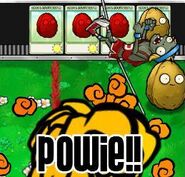 Explode-o-nut seed packet in the iOS and Android versions

An Explode-o-nut rolling towards two zombies

An extra Explode-o-nut seed packet after watching an ad

A faded Explode-o-nut seed packet in the iPad version

Retrieved from "https://plantsvszombies.fandom.com/wiki/Explode-o-nut?oldid=2366095"
Community content is available under CC-BY-SA unless otherwise noted.