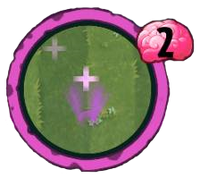 more.
Draw a card.
When Dr. Zomboss sent Meteor Z and Huge-Gigantacus from space, they smashed a tunnel to the center of the Earth. There, Plants and Zombies had evolved into insane new forms.
Evolutionary Leap is a colossal super-rare zombie card in Plants vs. Zombies Heroes and a member of the

more and draws a card. This former ability does not activate on Trickster as there are no other zombies that are more expensive than it.

When Dr. Zomboss sent Meteor Z and Huge-Gigantacus from space, they smashed a tunnel to the center of the Earth. There, Plants and Zombies had evolved into insane new forms.

To use this card well, it is best used in a ramp deck (a strategy to play expensive cards earlier). Flag Zombie and Interdimensional Zombie grant you access to more expensive zombies in the early game, allowing Evolutionary Leap to get powerful zombies early. You can also use this on an undesirable zombie created from Bad Moon Rising for a more helpful one.

Octo Zombie and Zombot Plank Walker are the only 8-cost zombies, while Zombot 1000 is the only 9-cost and Trickster is the sole 10-brain one. You can therefore abuse this by using Evolutionary Leap on any zombie that costs 7, 8 or 9.

Transforming a zombie in Medulla Nebula essentially refunds the two brains used. If in a desperate situation or if there is simply an undesirable zombie in the environment, this trick can be used to obtain a new zombie that could possibly turn the tables in your favor, while getting a refund and possibly a card that could help even more. Beware, however, as this is extremely luck-based and can backfire heavily unless the number of higher-cost zombies are limited.

Be careful as Forget-Me-Nuts, Brainana, and Dark Matter Dragonfruit, as they can increase the cost of this trick or prevent you from playing it.

There is almost no way to stop this trick since it will transform the zombie right away when it is used. Be on the lookout for zombies that could transform into dangerous threats, most notably, zombies that cost 8, those being Zombot Plank Walker and Octo Zombie. Although very hard, eliminating these zombies as soon as possible must be a top priority, as a Zombot 1000 during the Zombie Tricks phase will either defeat you straight on, or ravage your defenses and leave you with very little to survive through the remainder of the match.

You can use Forget-Me-Nuts or Dark Matter Dragonfruit to increase the cost of this trick. Brainana can also be use to prevent this trick from being played, unless there are enough Zombology Teachers or Gentleman Zombies.