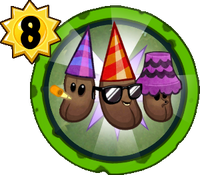 A Plant does three Bonus Attacks.
Don't consume after 5 p.m. You'll be up all night.

Espresso Fiesta is a premium super-rare plant trick card in Plants vs. Zombies Heroes and a member of the

to play, and its ability makes a selected plant do 3 bonus attacks.

It is based on the Coffee Bean from Plants vs. Zombies, having a similar appearance to it.

Its name is a portmanteau of "espresso," a type of coffee made by forcing steam or boiling water through ground coffee, referring to its appearance, and "expresso fiesta," which is "party express" in Spanish, referring to the hats on two of the coffee beans.

Its description is a reference to the consequence of drinking too much coffee, due to the effects of caffeine that can be found in it.

Don't consume after 5 p.m. You'll be up all night.

Espresso Fiesta is a strong finishing trick when you have the opportunity to finish your opponent off via brute force; combining it with a powerful plant like Super-Phat Beets, Winter Melon, Smashing Pumpkin will completely obliterate zombies and will heavily damage or defeat your opponent, and if said plant has

Strikethrough, or Splash Damage (including plants that can attack on multiple lanes like Shooting Starfruit), finishing the game off will be easier. While you can also play it on plants that benefit from doing damage like Captain Cucumber, Party Thyme, and Venus Flytrap, they ultimately result in a longer game as they lack the power to make an offensive difference (unless boosted), so in most cases, you are better off conserving Espresso Fiesta for a heavy-hitter to just end the game instead.

But due to Espresso Fiesta's hefty cost of 8

, your deck must be suitable for the late game. Chompzilla can either use healing cards like 2nd-Best Taco of All Time to sustain herself until she can play it, or use sun-generating plants to play this card much more quickly, while Grass Knuckles can build a wall of tough Team-Up plants to hold off the zombies. Captain Combustible and Green Shadow can run a control deck with damaging cards and

You should also keep in mind that our of the three bonus attacks, your opponent has a high chance to block at least one of them. This can be circumvented by either exhausting your opponent's Super-Blocks or using a

Bullseye plant (although the latter is only possible as Grass Knuckles and Captain Combustible). Also, you are better off playing other things if Bonus Track Buckethead is on the field, as he will render this card completely useless.

Provided that your opponent is using this as a last resort, the best counter to this is to finish your opponent before they get to boost their plants and play this trick. If you did not, you can put a gravestone or a shielded zombie in front of a strong plant to discourage your opponent from playing it on that plant; at the very least, you can block one bonus attack using a disposable zombie. However,

Strikethrough are able to bypass the obstacle.

Certain zombies can also function as a counter against Espresso Fiesta. Defensive End makes Espresso Fiesta more expensive, allowing you to deal with your opponent for longer until the inevitable end. Undying Pharaoh can prevent you from being defeated by the bonus attacks unless Undying Pharaoh itself is the one being attacked. Gargantuar Mime will almost always do three bonus attacks considering that he is not the target of the plant doing it, and that nobody would play it on imitator. And finally, Bonus Track Buckethead prevents bonus from the plants, forcing your opponent to hold this card.. Playing Zombie Coach and Planetary Gladiator will also completly nulify the strategy, because it's not a good option just to spend a lot of sun to remove a 1-cost zombie and even if it does happen espresso fiesta can't be played either. 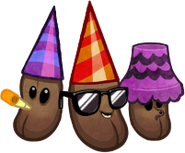 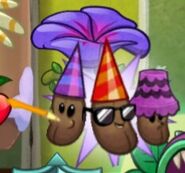 Espresso Fiesta on the advertisement for the Captain Combustible Ally Pack 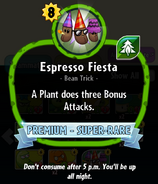 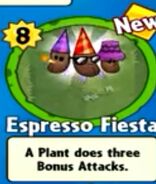 The player receiving Espresso Fiesta from a Premium Pack

Espresso Fiesta on the advertisement for the Captain Combustible Ally Pack 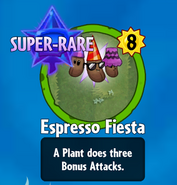 Retrieved from "https://plantsvszombies.fandom.com/wiki/Espresso_Fiesta?oldid=2277797"
Community content is available under CC-BY-SA unless otherwise noted.