Engineer is a playable zombie class in Plants vs. Zombies: Battle for Neighborville. He is a

Support class. His ability set from previous games has also been completely changed to better suit his support role; his Sonic Grenade has been replaced with the Bullhorn Swarm, his Big Bolt Blaster is now a deployable sentry turret called the Heavy Helper which shoots plants while also increasing the damage output of nearby zombies instead of a gatling ability, and his Jackhammer has been replaced with Double Time (while his Jackhammer is now his sprint, though the Engineer will still be immune to Burrow). In addition, the Concrete Launcher's projectiles now bounce on walls before exploding.

Engineer's primary weapon is the Concrete Launcher, which fires explosive concrete chunks that bounce off walls before detonating. Each chunk of concrete deals 36 impact damage and 22 splash damage. The Concrete Launcher can be fired 10 times before needing to be reloaded.

Engineer is a very helpful asset to your team. His Double Time can give him and other zombies a speed boost, allowing you to rush into objectives or to retreat faster. His Concrete Launcher now bounces off of walls, allowing you to trickshot your enemies in wall-based areas. His Bullhorn Swarm can home in to enemies and multiple Bullhorns can stun you longer, making him a threat in mid to close combat. The Heavy Helper is very useful because of its damage and ammo buff that it gives to the zombies.

Engineer proves to be a tricky character to vanquish one-on-one due to abilities like Bullhorn Swarm and Double Time which can paralyze you and provide an escape for Engineer. It is heavily advised to not try and attempt to vanquish Engineer with the Chomper, as the Engineer is designed to directly counter them. His Heavy Helper is very dangerous, as it has above-average health, damage and has aimbot, plus it gives zombies a damage and extra ammo buff. That being said, his large size and easy hitbox makes the Cactus, Sunflower and Rose effective counters to the Engineer. The Cactus can snipe the Engineer with a fully charged shot, the Sunflower and Rose's above-average speed and damage can make attack them very hard. Just keep your distance from him, and he should be easy to take out.

When Engineer is sprinting any Zombie behind him gets a small speed boost which stacks with more Engineers, it's great for getting to the objective faster. 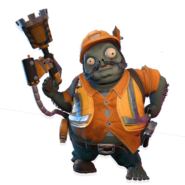 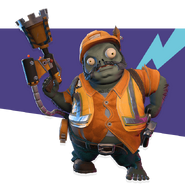 The Legendary Feastivus Master costume, only available during Feastivus
Add a photo to this gallery
Retrieved from "https://plantsvszombies.fandom.com/wiki/Engineer_(PvZ:_BfN)?oldid=2299450"
Community content is available under CC-BY-SA unless otherwise noted.