N/A (unlocked from the start)
Equipped with the latest Zomboss do-it-yourself gear, the Engineer is ready and able to master the art of building stuff - what it does after he builds it is lost on him.

N/A (unlocked from the start)
Equipped with the latest Zomboss do-it-yourself gear, the Engineer is ready and able to master the art of building stuff - what it does after he builds it is lost on him.

Engineer is a zombie in Plants vs. Zombies: Garden Warfare and Plants vs. Zombies: Garden Warfare 2. He is one of the four playable zombies on the Zombies team (8 in Garden Warfare 2). He serves a similar role to the Cactus plants, however, in fact, he serves as a support class since he is able to construct usable turrets like the Zombot Drone and stunning abilities like Sonic Grenade or Proximity Sonic Mine, which also forces Chompers to uproot, as well as a Jackhammer or Turbo Jackhammer to ride around on. He can also build teleporters and Zombot Turrets in Gardens & Graveyards and Garden Ops.

Equipped with the latest Zomboss do-it-yourself gear, the Engineer is ready and able to master the art of building stuff - what it does after he builds it is lost on him.

His explosive Concrete Launcher and all-new construction turret make him a force at mid-range!

The Concrete Launcher is the primary weapon of the Engineer.

The Homemade Reload Kabob is a great way to improve reload time.

Don't start any project without a doodad! It's fuzzy, warm to the touch, and increases ammo capacity.

These explosives will actually explode and help cause extra damage to those meddling plants.

The Engineer's primary weapon functions similar to the Peashooter except the fact that it fires slightly slower, arcs over distances, has limited range but has more ammo. Equipped with the Jackhammer for quick movement, critical impact damage with the Concrete Launcher, and the Sonic Bombs to stun enemies, the Engineer can be very dangerous in a one-on-one fight. The main target of the Engineer is the Chomper due to him having a way to counter their Burrow ability (Sonic Grenade) and being immune to instant death when on the Jackhammer. He has the Zombot Drone which can be devastating due to its Cone Strike, which can vanquish quite a few plants at a time and is useful for softening up the defenses around a garden for capture in Suburbination and Gardens & Graveyards. It is worth a mention about his suppressive abilities. Because of the Concrete Launcher's splash damage, it can be used to phase out enemies and push them back because they want to move out of the way of damage. Furthermore, by building teleporters the Engineer can create very useful shortcuts for its teammates. He can also create Zombot Turrets to protect the teleporters that can be upgraded up to Mark III. On the whole, it is much more suited to riding from teleporter to teleporter to support the team and/or rushing in to get quick kills. Although the teleporter is able to be destroyed and guarded by plants most of the time, so it's advised to bring a group of zombies to build and protect the teleporter.

The Cactus is probably the best choice to counter the Engineer due to her superior range over the Concrete Launcher. She has enough power to kill the Engineer in a few hits, the Garlic Drone and Artichoke Drone to counter his drones, and finally Tallnut Battlement and Iron Maiden for protection. Also, the Sunflower can be useful because she can avoid the Concrete Launcher's shots more easily with her elevated movement speed, heal off any damage then hit him hard at a range with the Sunbeam. Peashooters can use Hyper offensively to attack the Engineer or defensively to get up to high vantage points and render the Concrete Launcher almost useless, while Chili Bean Bombs and Pea Gatling can be used to destroy both drones and teleporters. The Engineer is also a larger target with no increase in health, making him easier to hit. 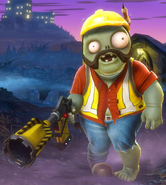 A render of the Engineer

Another render of the Engineer, on his Jackhammer

Another projectile of Engineer 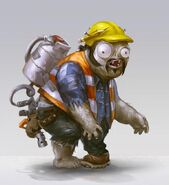 Concept art of the Engineer 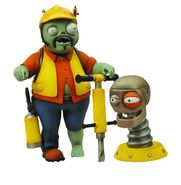 An Engineer figure with his Jackhammer and Zombot Turret 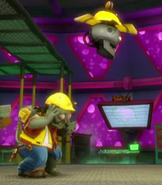 An Engineer using the Zombot Drone. 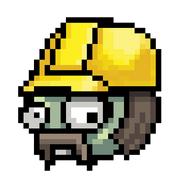 Another render
Add a photo to this gallery 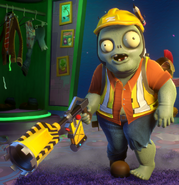 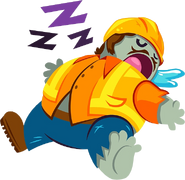 Official sticker from emojiTap
Add a photo to this gallery 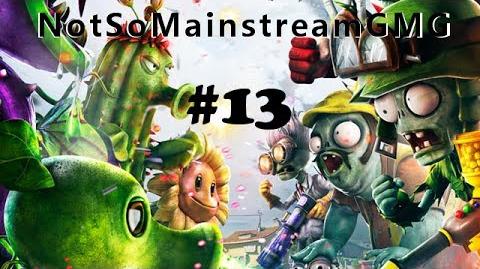 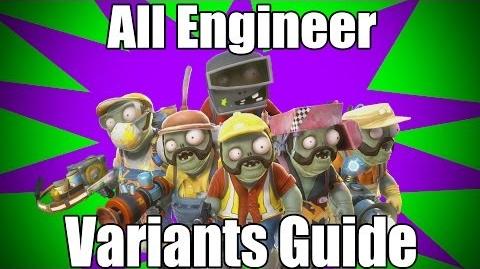 Engineer Variants Guide
Add a photo to this gallery

Retrieved from "https://plantsvszombies.fandom.com/wiki/Engineer?oldid=2280852"
Community content is available under CC-BY-SA unless otherwise noted.