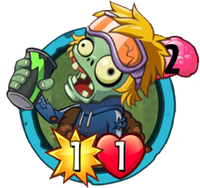 Start of Tricks: This gets +1

and moves to a random lane.
He can quit any time he wants.
Energy Drink Zombie is an event zombie card in Plants vs. Zombies Heroes and a member of the

Frenzy trait, and his ability moves him onto another random lane (if there is one) and gives him +1

at the start of every Zombie Tricks phase.

He can quit any time he wants.

Energy Drink Zombie is best played in the early game. He is similar to Zombie Chicken, but he moves to a random lane after the plant hero ends their turn instead of when a plant is played in his lane, so he'd keep moving around as long as he's alive with empty lanes for him to move to. If you manage to keep him alive, he can get +1

every time the round enters the Zombie Tricks phase, which makes him powerful enough to destroy most plants and do heavy damage to your opponent, thanks to

Frenzy. To make Energy Drink Zombie last longer, try to bring Vitamin Z or other boosting cards to assure that he destroys something on the lane he moves to. He can also be boosted by Ancient Vimpire.

Take note that he is also a sports zombie, so if you play as The Smash, playing zombies like Team Mascot and Zombie Coach can help boost him even further or protect him. In addition, when playing as The Smash, unless you need to protect this, avoid using Possessed on him, as he already has the

Frenzy trait, and there are other health-boosting tricks like Camel Crossing that are more efficient.

This zombie is easier to deal with in the early game before he gets boosted too much for the player to handle. You should always have instant-kill cards at disposal, such as Whack-a-Zombie, which can destroy him during turn 3 when he is not very dangerous. The best choice for decks, however, is to have as many low-cost high-damage plants, such as Wild Berry, that can destroy him during turn 2, but the player should not forget the randomness of both this zombie and Wild Berry. Having many Wall-Nuts can be a good idea to stall him until the player gets tricks to destroy him. You can also use stat-reducing cards like Weed Whack, which can also destroy him if used right after he is played. If this zombie gets out of hand, resort to Bouncing, because he is not suited for the late-game and must accumulate stats early on. You could also try transforming cards.