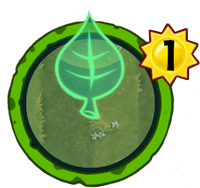 .
Livin' large, oh yeah.
Embiggen is a super-rare plant superpower trick card in Plants vs. Zombies Heroes and a member of the

to play, and its ability gives a selected plant +2

. Its zombie counterpart is Galvanize.

It is based on the real meaning of embiggen, which is to make something larger, as gaining stats are the same as 'growing bigger' in this game. This word is often not used in formal communication.

Its appearance may be based on mint, a genus of plants in the family Lamiaceae.

This superpower is a cheap trick which is used to boost plants you do not want to lose to make them survive longer and/or plants that already hit hard to make them even stronger. However, only Green Shadow and Captain Combustible can use this superpower and only once, so plan carefully.

If a powerful plant is further boosted, be prepared to play instant-kill cards like Locust Swarm or Rocket Science to destroy that plant, or use Bouncing cards such as Pogo Bouncer or Zombot Stomp to remove the boost.

Embiggen being played on Kernel Corn in the official trailer