Do 3 damage to a Plant.
Ever get zapped by static electricity? It's like that, times a bazillion.
Electrobolt is a super-rare zombie superpower trick card in Plants vs. Zombies Heroes and a member of the

to play, and its ability does 3 damage to a selected plant. Its plant counterpart is Meteor Strike.

Its name may be inspired by the Magic Power of the same name from Peggle Nights, another game by PopCap Games.

Ever get zapped by static electricity? It's like that, times a bazillion.

Unlike Bungee Plumber, this trick does more damage for the same price, but with the inability to target your opponent directly. Nonetheless, it does enough damage to destroy many dangerous threats, such as Bananasaurus Rex, Bloomerang, Black-Eyed Pea, and other plants with 3 health.

If you are playing as Electric Boogaloo or Z-Mech, this superpower is basically the same as Stayin' Alive and Missile Madness, unless you need your health back or damage multiple plants at once, respectively.

Since it is a trick, there is nothing you can do on the turn it is played. However, you can reduce the impact by boosting the plant's health or healing it, or by having a lot of threats on the field.

Additionally, you can also play Umbrella Leaf or play shielding cards like Root Wall in order to prevent the plant from taking damage, but remember that the former can still be destroyed by Electrobolt. 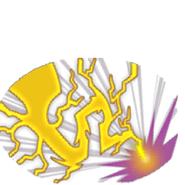