For the version in Plants vs. Zombies 2, see Electric Peashooter.

Shots can be manually detonated to deal more damage

Super Rare
As the most electrifying Plant in PvZ entertainment, you can always count on Electro Pea to make a bad pun about how charged-up he is.
Electro Pea is the Super Rare electric variant of the Peashooter in Plants vs. Zombies: Garden Warfare 2. He deals electric damage to his opponents, which means that when his projectile hits a zombie, the damage will arc and harm other nearby zombies as well. Like Petrified Cactus and Captain Cannon, he can detonate his peas in mid-air for even more damage.

As the most electrifying Plant in PvZ entertainment, you can always count on Electro Pea to make a bad pun about how charged-up he is.

Push the fire button while shots are airborne to trigger an extra large electric explosion!

It has a somewhat high learning curve compared to the others, but this leads to a greater damage potential. Due to the detonation mechanic, players who regularly spam peas from long range will find it difficult to use this Peashooter in that way; two shots cannot be on screen at the same time.

However, patient players may find this long-ranged tactic very effective for dealing widespread electric damage if they can master the timing of detonating, especially in objective modes such as Turf Takeover or Suburbination. Or Alternatively, staying in vantage points close to the enemy base (for example in Turf Takeover) can solve such problem. Whatsoever, staying near the enemy might expose yourself, so duck behind cover consistantly like how you play a sniper. Focus on imps as they're much easier to hit using your primary weapon, and they will cause problems to your team anyway.

More impatient players may use a more close-ranged tactic. Stay slightly outside of a Chomper's range between you and your enemy, and mash your shoot button. This allows the shots to travel a small way forward and detonate. The detonation, if used in a crowded area, may hit many zombies at once. Keep an eye on both your health and your ammo; should either of these become low or run out at a bad time, you could risk being vanquished.

For the close-ranged strategy above, the most suitable upgrades would be any of the following:

As always, the combination of upgrades depends on how you play. If these upgrades don't work for you, try different combinations.

Electro Pea is very dangerous to come by, as it is a very powerful character. Players usually like to use Hyper and jump up and down in the air (Pogo peas). This, combined with him having the smallest plant hitbox, makes him very hard to hit, while he vanquishes you with his splash damage or by his manual detonation. However, Electro Pea players generally use their manual detonation as a crutch, mashing their shoot buttons instead of an actual strategic ability. Superheroes are a suitable preference for effective countering electro pea, but aware of them when it's in gatling mode - it might vanquish you in seconds.

This combined with his already-limited range (thanks to his manual detonation mechanic) limits Electro Pea to close-ranged fights, so it is best to attack him from a distance. Take care though, as the Electro Pea could be able to reach you quickly using Hyper. 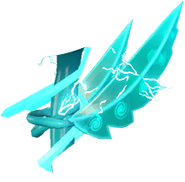 Electro Pea with Power Chomper, Power Cactus, and Electro Citron in the trailer

Electro Pea in the customization booth 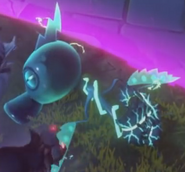 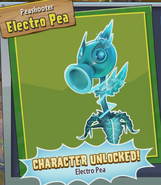 An Electro Pea doing a gesture