Can charge up shots to deal more damage, at the cost of using up more ammo

Super Rare
Electro Citron tells people that his mask is to conceal his secret identity, but it's really just part of an elaborate grounding system that prevents him from shocking himself every time he blinks.
Electro Citron is the Super Rare electric variant of Citron in Plants vs. Zombies: Garden Warfare 2. The Electro Charger is his primary weapon.

Apart from being able to spread damage to multiple nearby enemies, the Electro Charger can also be charged up to release a powerful shot, similarly to Plasma Pea and Future Cactus. However, doing this will require 8 ammo, which is 1/3 of the maximum 24-ammo supply of the weapon. He was first teased in the Aloe 5: Gardening spoof image but was later shown in solo-play gameplay video of Solo Ops.

Electro Citron tells people that his mask is to conceal his secret identity, but it's really just part of an elaborate grounding system that prevents him from shocking himself every time he blinks.

Hold down fire to charge his primary attack across three distinct power levels!

The Electro Citron's primary weapon is the Electro Charger. It is a chargeable, single shot weapon.

Electro Citron fills the niche that many Electric variants try to fill, which is the anti-team role. If enemies are bunched together and you fire a fully charged shot at one of the players in the middle of the group, you can do damage to your target and the zombies around them. The biggest downside to this Citron is the limited ammo, if you tend to use his fully charged shot, you will find yourself reloading often as the level three charge eats up a third of your ammo, in return for very massive damage, making this variant very capable of clearing out hordes of AI zombies, or players who are standing together at a heal station. Imps in particular make good targets, due to the surprisingly generous splash damage on the charger and their extremely low health. Be warned, Electro Citron is almost useless at long and medium range. Try not to attract too much attention as your damage output is not as good as most zombie classes even at close range. Traveling with other plants is recommended.

If you're low on health, avoid standing close to your allies as Electro Citron doesn't necessarily have to shoot you to finish you off. Keep your distance, and use cover as much as possible to avoid getting hit. Luckily, this Citron in particular has a much harder time defending itself at pretty much all ranges. Try to vanquish it at long or medium range to avoid taking much damage. If you are skilled enough, you could get right up in his face to quickly take him out. Electro citrons uncharged shots don't do much damage, yet most players will use it anyway during a close range fight. 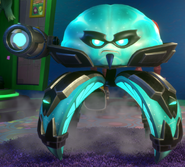 Electro Citron charging its attack up