Rare
Electro Brainz' supercharged, powered-up approach to fisticuffs might just be the jolt the Zombies need in their eternal struggle versus the Plants.
Electro Brainz is a Rare electric variant of Super Brainz in Plants vs. Zombies: Garden Warfare 2. He was revealed on January 6, 2016 on PopCap's Facebook page, and thus being the last variant to be revealed on Facebook and Twitter. Electro Brainz has a longer melee combo than Super Brainz, dealing up to 5 hits rather than 3. His beam is weaker than most of the other variants, but makes full use of the strength of the electric element.

"Electro Brainz' supercharged, powered-up approach to fisticuffs might just be the jolt the Zombies need in their eternal struggle versus the Plants."

His Electro Fists deal electric damage that arcs from Plant to Plant!

The primary short range weapon for Electro Brainz is Electric Fists, and the long range is Electro Beam.

Electro Brainz' un-aimed fire. Punches up to five times consecutively, with each punch dealing 6, 12, 18, 24, and 30 damage respectively. The first, third, and fifth punches also deal electric chain damage to nearby plants, dealing 3 damage to up to three plants each.

Electro Brainz' aimed fire. Deals 1-8 critical damage and 1-7 non-critical damage at a high rate of fire, with damage depending on the distance. The beam also deals electric chain damage to nearby plants, dealing 3, 2, and 1 damage to the first, second, and third plant respectively.

Electro Brainz is a powerful character when fighting against large teams of enemy players. His massive damage output comes from the electric arc damage from his Electro Beam, although weak at first glance, dealing 3-8 damage with each damage number, it can do 6 arc damage with each time the 3-8 damage marker shows up. This makes Electro Brainz a force to be reckoned with when the enemy team groups up together, making him an excellent choice when defending the enemy Rose's portal, or attacking the plant garden. If you plan to vanquish an opponent, do not aim for them, but rather an ally that is close to them, as your arc damage will defeat most classes quickly.

If you are battling against an Electro Brainz, keep your distance from your allies as much as possible. Your health will drain faster than your reflexes can react, so you should always try to keep your distance from your allies, even if you think an Electro Brainz is not present. Try to make use of cover when he fires at you, although his direct damage is incredibly weak, Electro Brainz deals damage very quickly, so it is not advised to stand in his line of sight for very long. This class is especially dangerous if you are playing as a Rose, or a Sunflower, since you will most likely be near your allies to use your support abilities effectively. Try to defeat this class first if you see him, otherwise, your whole team will be vanquished by one Electro Brainz, or weakened enough for minor splash damage from other zombies will finish your whole team off.

Electro Brainz is also encountered in Garden Ops. If the player gets a Super Giga Gargantuar Wave, which is getting 3 Giga Gargantuar boss icons, a bunch of Electro Brainz will back them up. They appear alongside with a bunch of Physicists and Electricians backing up the bosses. The AI Electro Brainz here are aggressive, fast and dangerous and can deal massage out massive damage over the plants if not taken cared of quickly, especially if it's on CRAAAZY difficulty.

Electro Brainz's Dialogue in the story quest, "League of Awesome"

I'm Electro Brain, master of ELECTRIC BOOMTIME!
I was stuck in THAT computer! ZAP!
Oh no! The power plants approacheth! It's BOOMTIME!
(after battle:)
ZAP! Say what? The LEAGUE is reuniting without my FISTS OF STATIC?
The SUPER DUPER LAIR awaits my hair! PHRRZZZZAP!

Gameplay of him attacking a Rose and a Chomper 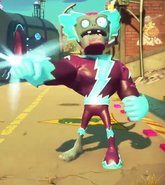 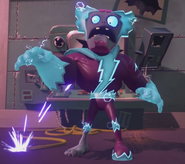 Electro Brainz in the "League of Awesome" story quest 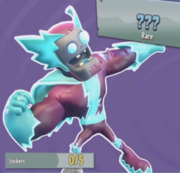 Electro Brainz in the Stickerbook 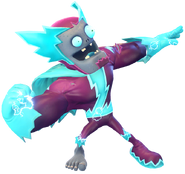 Mastered version of the bobblehead