Electric Slide are good at making enemies scatter. Their arcing electricity, Funky Bouncer, and Disco Tornado are great at pushing enemies around
Electric Slide is a playable zombie class in Plants vs. Zombies: Battle for Neighborville. She is an

Electric Slide are good at making enemies scatter. Their arcing electricity, Funky Bouncer, and Disco Tornado are great at pushing enemies around.

Electric Slide's primary weapon is the Boogie Bolt, a single shot bolt of electricity that deals arcing damage to enemies nearby the target. 6 consecutive hits will stun plants for a few seconds. It deals 14.9 damage (18 critical) and 14 arc damage to enemies nearby the target whilst firing at a rate of 190 RPM (rounds per minute). Electric Slide can fire 18 Boogie Bolts before needing to recharge.

Electric Slide is very good at taking space from the enemy and making space for your team: Her Funky Bouncer is great for clearing objectives and forcing attacking enemies away, disrupting their attack, and her Disco Tornado is amazing at forcing plants out of an objective or risk the huge damage that the Disco Tornado can bring. While she is classed under

Attack, she is very effective at playing offensively on defense. By flanking behind the attacking plants, she can harass the enemies back line with her arcing electric Boogie Bolts and her Disco Tornado, which can force plants to break off their attack and regroup, possibly saving an objective. When plants start to notice her and counterattack, her Outta Fight! is great for making a clean escape and coming back for another go.

Electric Slide's weakness, however, is one-on-one combat. Her Boogie Bolt is effective against groups, because if you hit one enemy, you hit them all. When facing a single enemy, however, you will have to rely on your shots hitting their target to do any damage. You may find that you will have to get up really close to do any damage, especially against smaller targets like Night Cap and Acorn. However, this just means that they can hit you more easily. Disco Tornado is relatively useless against single enemies as they can easily escape, or the Tornado may not even hit them. Funky Bouncer should only be used if the situation is dire and you reach low health; as should Outta Fight!, but because you may be the plant's only target, they could easily follow you and attack you once the timer ends.

To beat an Electric Slide, try to hop around and make yourself a difficult target so they can't hit you. Just make sure that your shots land; otherwise, the fight could go on for a long time and you could easily slip up. For larger targets like Citron and Snapdragon, try a hit-and-run strategy so you can damage the Electric Slide without it damaging you. 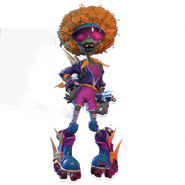 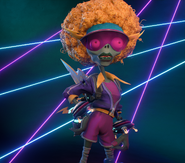 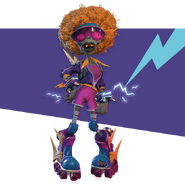 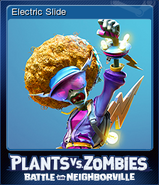 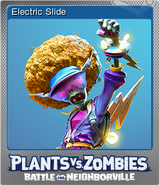 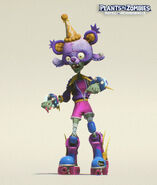