For the version in Plants vs. Zombies: Garden Warfare 2, see Electro Pea.

Electric Peashooters fire pea-like orbs that pass through zombies and crackle with electrical power, doing damage all the while.

Electric Peashooter expects resistance, but he doesn't want to ohm anybody.
Electric Peashooter is a premium plant in Plants vs. Zombies 2. He fires pea-like orbs every 2.25 - 2.4 seconds that penetrate every zombie in his lane and deals forked lightning damage to surrounding Zombies in one extra lane above and below.

Like most other peashooting plants, the Electric Peashooter is based on the plant Pisum sativum. The term peashooter is normally used to refer to a toy version of a blowgun, or as a slang for small or low-caliber firearms. The name also refers to the fact that peashooter shoots peas. His ability is also partially based on Lightning Reed.

His Almanac entry is a pun of "ohm," the SI unit of electrical resistance, and either "own" or "harm."

Electric Peashooters fire pea-like orbs that pass through zombies and crackle with electrical power, doing damage all the while.

Electric Peashooter expects resistance, but he doesn't want to ohm anybody. 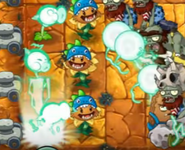 His Plant Food effect now has a chance to shoot 2 more purple large electric peas, which are even more powerful.

Electric Peashooter can potentially be one of the more potent multi-hitting plants in the game. Not only can he hit every zombie in his lane like Laser Bean, but the shots also crackle into other lanes, potentially defeating many weakened zombies at once. This makes him great against Zombie Chickens and Ice Weasels, due to the number of zombies that will likely be hit. They are also effective against zombies such as Imp Cannon, Disco-tron 3000, Troglobites, Imp Porters, and Arcade Zombies as they can target them and all of their summoned zombies at the same time. Because of his similarities to Laser Bean, the two are interchangeable in which to use them. Laser Bean will be more useful in worlds like Pirate Seas where zombies are grouped up in lanes because of his Plant Food effect, while in worlds like Wild West , Electric Peashooter will shine as he can deal with Zombie Chickens more efficiently. He's also useful in Dark Ages, Ancient Egypt and Frostbite Caves, since his peas pass through graves and ice blocks. His Plant Food power is great against groups of zombies, as he fires three giant peas that split into smaller ones. However, these should not be your only offense, for they fire fairly slowly, and their cost is a bit high. Having other plants to defend or support Electric Peashooter will help. Also, note that unlike most peashooting plants, this does not benefit from Torchwood. Keep this in mind and use defensive plants to help him instead. He is also good for getting rid of graves or melting frozen plants or zombies, much like other area-of-effect plants. Another thing to note is that unlike Threepeater, Electric Peashooter cannot attack zombies in other lanes if there is nothing to attack in its lane.

Electric Peashooter is a great plant against Jester Zombies since these peas can hit them without getting deflected, even though they are projectiles. He can also hit Excavator Zombies and Shield Zombies directly since the projectiles penetrate their shields (shovel and force field, respectively).