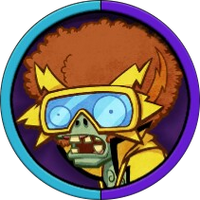 Not to be confused with the Plants vs. Zombies 2 Epic Quest, Electrical Boogaloo.

Electric Boogaloo is a zombie hero in Plants vs. Zombies Heroes and the leader of the

Crazy classes. His signature superpower is Stayin' Alive, which does 3 damage to a selected plant and heals the zombie hero for up to 3

. He is also one of the three selectebale Zombie Heroes for free.

He is the hero version of Disco Zombie.

His appearance is based on the redesigned version of the Dancing Zombie from the original Plants vs. Zombies. His name is based on the electric boogaloo, a funk-style of hip hop dance. The first part of the name also applies here because Electric Boogaloo uses electric powers and dances. His name is also derived from the movie Breakin' 2: Electric Boogaloo.

His name is similar to the Epic Quest from Plants vs. Zombies 2 called Electrical Boogaloo.

His description refers to the phrase, "Disco is dead." It might also be a reference to the achievement in PVZ relevant to the Dancing Zombie, Disco is Undead, as Electric Boogaloo is one of these zombies.

They say that disco is dead, but he's down with the dead.

"This maniac on the dance floor brings a huge horde of Dancing Zombies that Strengthen each other. Direct damage helps him punch through crucial lanes for the win."

The main strategy with Electric Boogaloo is swarming the field with boosted zombies, notably consisting of those in the pet or dancing tribe. He can use certain zombies such as Zookeeper and Aerobics Instructor to boost zombies' strength. He can also use Cat Lady or Flamenco Zombie to deal enormous damage to the plant hero. However, these zombies tend to have low health, especially if not boosted, which means that skilled opponents can take advantage of this to ruin his strategy. Fortunately, he has access to Valkyrie to compensate for such losses and cards that make multiple fighters to boot.

Electric Boogaloo does shine in using tricks, with access to a variety of them. He can use both instant-kill tricks like Locust Swarm and direct damage tricks such as Cakesplosion to remove big threats. Smaller threats on the field can also be easily removed with cards such as Bungee Plumber and Nibble. Stat-boosting cards from the Beastly class, such as Vitamin Z and Maniacal Laugh, can be played on Crazy zombies, such as Newspaper Zombie or Valkyrie, making them even more potent threats. Healing options are also plentiful for Electric Boogaloo, though not quite on par with Rustbolt or The Smash. Electric Boogaloo's superpowers are great as well, especially his signature superpower, Stayin' Alive, as it's both a damaging and healing trick.

Some zombies' abilities activate upon receiving damage, and Electric Boogaloo has the most zombies with “When hurt” abilities. While they range from cheap-but-weak to strong-but-costly, the player has the capacity to manipulate the situation to their advantage. One example is to use Biodome Botanist to put a weak plant in the way of these zombies or a zombie that does damage to both plants and zombies simultaneously. That being said, it is also recommended to make sure that said zombies are boosted enough to take enough hits and any overly powerful plants are disposed of beforehand.

Starting the game with Electric Boogaloo, however, can be difficult, as his starting zombie cards do not fare well against most opponents. In addition, he has absolutely no way of drawing more cards aside from Evaporate and Interstellar Bounty Hunter. So opponents can easily drain his cards out and win from there. To accommodate for this, Electric Boogaloo can opt to use a control deck with Gargantuar zombies like Smashing Gargantuar and Gargantuar-Throwing Gargantuar for late-game dominance. With proper use of tricks, he can effectively stall the game or at least take as little damage as possible before he can put Gargantuars into play.

Overall, Electric Boogaloo has his ups and downs with proper strategy, but he can mostly swarm the field with dangerous zombies in quick succession. Just be careful to not waste all of your cards at once, so as to keep up with the battle.

As mentioned above, Electric Boogaloo's biggest flaw is his inability to draw cards. Try to bait him into using all of his cards against you. From there, you can take care of his zombies easily. When against Electric Boogaloo with a dancing deck, it is recommended to destroy his dancing zombies before he plays a Flamenco Zombie to potentially end the game in his favor. In the case of Electric Boogaloo using a pet deck, always watch out for Cat Lady, as he will try to spam pet zombies to boost her strength.

You also need to be careful of his tricks, as he has access to cards that can destroy your plants easily, and Nibble and Stayin' Alive to heal himself, not to mention all of the stat-boosting cards he can use. Therefore, the most optimal way is to play a rush game against him to make sure his tricks do not decimate you. Brainana and Dark Matter Dragonfruit work well to hinder or shut down his tricks, and you can also use Black-Eyed Pea or Sportacus to penalize him for playing them.

You can also drive him into the long game. This does, however, carry some risk, as Electric Boogaloo has access to Gargantuars' Feast and Zombot 1000, which could turn the tide of the battle and may cause a bad end for you.