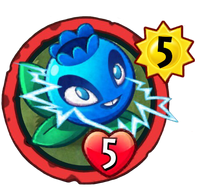 For the version in Plants vs. Zombies 2, see Electric Blueberry.

After combat here: Do 6 damage to a random Zombie or the Zombie Hero.
Does she strike a "random" Zombie with her lightning? Really? Or is she settling an old, unspoken score?

Electric Blueberry is an event plant card in Plants vs. Zombies Heroes and a member of the

. She does not have any traits, and her ability does 6 damage to a random zombie or the zombie hero after combat on her lane.

From February 21 to February 28, players could buy a Time Travel Bundle with Electric Blueberry. From March 7 to March 14, Electric Blueberry became available through the Weekly Event system for 1,000 tickets. As of May 3rd, 2017, she was made craftable.

Her description is a reference to how the game uses random number generators for her ability.

Does she strike a "random" Zombie with her lightning? Really? Or is she settling an old, unspoken score?

Electric Blueberry is a very powerful plant to use, being able to do massive damage of 6 to your opponent or their zombies, but at the same time, her luck-based nature of attacking can make her unreliable in most situations. However, 6 damage is still quite high, so it may be worth the risk to add some to your deck.

Spudow synergizes well with her, as he can give it protection with Team-Up plants, as well as let her gain strength with Spineapple. Solar Flare can also use Electric Blueberry well, being able to heal her with 2nd-Best Taco of All Time. Nightcap can Bounce zombies in her way, while Captain Combustible can boost her, allowing her to attack zombies and take more hits.

If you have Sergeant Strongberry in your deck, you can play him first and then Electric Blueberry so they can do 8 damage to a zombie, which is enough to defeat any non-boosted zombies except Zombot 1000, Knight of the Living Dead, Rodeo Gargantuar, and Wannabe Hero if your opponent's health is at least 8.

Try to play Electric Blueberry on an empty lane, although it is a slightly risky move due to the fact that your opponent could play a zombie with the

Deadly trait on that empty lane, making it so that Electric Blueberry can only do 6 damage once. Another option is to play her on a lane with a weak zombie with low strength so Electric Blueberry can activate her ability multiple times before finally getting destroyed. However, you should watch out for strength-boosting tricks in that case.

Take note that Electric Blueberry's ability hits your opponent if there are no zombies on the field.

Electric Blueberry does have some downsides, though. The first downside is that she has no strength, which means she is naturally vulnerable to Rolling Stone and Weed Spray, but this can easily be solved by boosting her with tricks like Fertilize or Berry Angry. Another downside is that her ability is luck-based as well, so you should not solely depend on her to handle your threats. Therefore, if you want Electric Blueberry to aim at a target you want, try to destroy other zombies to increase your chances. The third downside is that it takes a long time to destroy groups, due to her ability hitting only one zombie at a time.

This plant is a huge threat if left alone, and should be prioritized to be destroyed before she can do heavy damage to you or your zombies.

Deadly zombies is a great way of dealing with this plant. Due to her lack of strength, Hearty heroes can also deal with her easily by playing Rolling Stone or Weed Spray. If all else fails, Bouncing her with Backyard Bounce, Pogo Bouncer, or Zombot Stomp is also a viable idea, due to her high cost. You can also use Squirrel Herder to destroy Electric Blueberry instantly, as she is a berry plant. However, Spudow can play Grave Buster to destroy Squirrel Herder before she can activate her ability.

While she is luck-based, you can spam cheap zombies like Tennis Champ to have a higher chance of avoiding damage from her ability. However, Sour Grapes can ruin this strategy unless many of the zombies you played have at least 2 health. Having the field full of shielded zombies such as Trash Can Zombie or sports zombies protected by Zombie Coach can also almost negate the ability of Electric Blueberry.

Retrieved from "https://plantsvszombies.fandom.com/wiki/Electric_Blueberry_(PvZH)?oldid=2181339"
Community content is available under CC-BY-SA unless otherwise noted.