Plants vs. Zombies Wiki
Register
Don't have an account?
Sign In
Advertisement
in: China exclusive, Archived, Plants,
and 8 more
English

If you are looking for the Plants vs. Zombies: Journey to the West variant, see Electric Anemone.

Can fire lightning to attack the enemy.

If the zombie is in an air bubble (which can be made by Bubble Flower), it makes the bubble an electric bubble and does much more damage. It can be planted under water without oxygen supplies.

Electric Anemone was based on the plant of the same name from Plants vs. Zombies: Journey to the West.

Electric Anemone was based on the green sea fingers (Codium fragile), also known the dead man's fingers, a species of seaweed native to the western Pacific Ocean; as well as the blue branching seaweed (Fauchea laciniata), a iridescent blue species of red algae seaweed found in the San Diego-La Jolla Underwater Park.

However its appearance is based on the blue coral (Heliopora coerulea), a species of colonial coral which is actually the piled skeletons of tiny dead animals called polyps, and not a plant.

When fed Plant Food, it shoots a powerful electric ball which ricochets through many zombies on the lawn. The ball deals a huge amount of damage on contact and disappears when the whole amount of damage is released completely.

This plant's main use is to be placed along with a Bubble Flower for maximum damage potential. It is advisable to use both a lot on the world, as both of them work underwater without Oxygen Supplies. Remember to put just two Electric Anemones and one Bubble Flower to ensure maximum power. 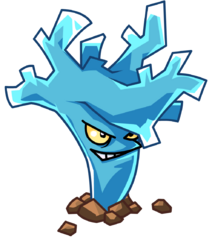 An Electric Anemone which is about to shoot 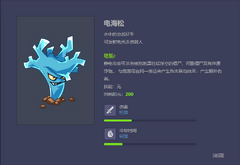