When defeated, drops a missile in the area where eaten

Egrett Flower (白鹭花战机; pinyin: báilù huā zhànjī) is a plant in the Chinese version of Plants vs. Zombies 2 introduced in the v2.4.6 update. He is a flying plant and as such is able to be planted on-air tiles in Sky City. He attacks by firing a high damaging rocket that briefly stuns. If a zombie is in front of him four tiles, he will fire a barrage of seven small projectiles. After a few spreads of projectiles, he will shoot a higher damaging rocket that briefly stuns.

Egrett Flower is based on the Pecteilis radiata, otherwise known as the "White egret flower," a species of orchid native to Eastern Asia that is named as such due to its resemblance to the Egret species of heron.

His name is a pun on "White egret flower" and the Grob G 520 'EGRETT', an aircraft produced by Grob Aircraft, due to his resemblance to an airplane.

When given Plant Food, Egrett Flower summons three explosive rockets that target the three nearest zombies and leaves a four-tile fire trail on both targeted and adjacent lanes. 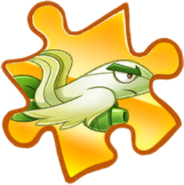 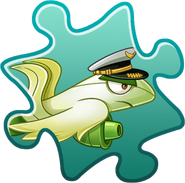 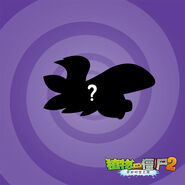 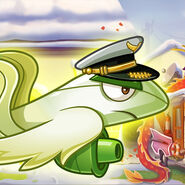 Egrett Flower on a Gold Tile

Retrieved from "https://plantsvszombies.fandom.com/wiki/Egrett_Flower?oldid=2332291"
Community content is available under CC-BY-SA unless otherwise noted.