Faking himself as a dinosaur egg. The eggshell, other than making himself cuter, has some defensive purposes.

Eggshell Imp had already learnt the naughty act of disguising himself as an egg, even while the other imps hatched a plan to steal the dinosaur eggs. What a smart imp.

Eggshell Imp (蛋壳小鬼僵尸) is a zombie encountered in Jurassic Marsh in the Chinese version of Plants vs. Zombies 2. He is a Jurassic Imp with an eggshell that increases his health and only appears when his egg is destroyed.

This Imp can be somewhat dangerous due to his high health, which can result of your defenses being broken if your attack is weak. In Jurassic Marsh, this zombie usually appears in groups of three or four in many lanes, likely causing for any lawn mowers to be lost and one more time it passes your defenses as long as there are no lawn mowers, it will eat your brains and cause the loss of a level, as he has an egg that protects him at first, and can only appear when the egg is destroyed. The egg is identical to a tombstone, which can block your attack to the zombies behind it.

When he is still in the egg, quickly kill or at least delay the Egg Stealer Imp when he is still carrying the Eggshell Imp egg if possible. When the egg is dropped deep into your defenses, a good counter is to use a Dinonip to instantly kill him. The egg acts as a tombstone so make sure to have lobbed-shot plants or multi-attack plants to attack the zombies behind it. Once hatched, use instant-kill plants, high-damage plants, area-of-effect plants, or stalling plants to defeat this zombie as fast as possible before your defenses get broke down. As this zombie only appears in later waves, the player should prepare their defenses to counter this zombie, as once he appears, he will appear in many lanes. 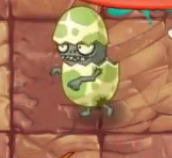 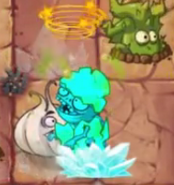 When the eggshell is destroyed

An Eggshell Imp being pulled by Dinonip's Plant Food ability 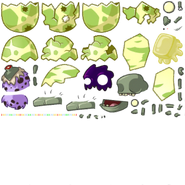 Poisoned Eggshell Imp
Add a photo to this gallery

Retrieved from "https://plantsvszombies.fandom.com/wiki/Eggshell_Imp?oldid=2349109"
Community content is available under CC-BY-SA unless otherwise noted.