An imp who stole an egg, gravity often causing him to fall, which occasionally causes him to drop the egg. It'd be bad if the egg squashed the plants.

Having no money to buy new clothes, Egg Stealer Imp chose the easy and violent way out to steal eggs, carry them out, as getting chased by dinosaurs is nothing new to him.

Egg Stealer Imp (偷蛋小鬼) is a zombie encountered in Jurassic Marsh in the Chinese version of Plants vs. Zombies 2. He has an egg similar to the Egg Pusher Imp's. However, he carries the egg instead of pushing it, so, he is slower than the former. After a while, he will randomly drop the egg similar to how the Imp Porter drops his backpack but to the front. The egg will land on a random tile and if there is a plant on that tile, it will be instantly killed. If he is killed when he is still carrying his egg, the egg will be dropped right where he is killed. The egg spawns a baby dinosaur or an Eggshell Imp when destroyed. He looks like the Jurassic Imp but has more health, though not as much as the Egg Pusher Imp.

This zombie has less health and slower than both Imp Porter and Egg Pusher Imp but he is more dangerous as he drops the egg forward. Once dropped, the egg lands randomly on any tile, killing any plant that he lands on. If the egg is dropped deep into your defenses, it will cause your defenses to break down once destroyed. Note that the egg also slowly damages itself over time.

Certainly the best solution is to kill this zombie before he drops his egg. Ghost Pepper or Lava Guava are particularly good at dealing with him in this way. You can also try other instant-kill plants, plants that can penetrate barriers and area-of-effect plants. After he drops his egg, use Dinonip to spit the egg out of the lawn.

Remember that Shrinking Violet does not instantly kill this zombie despite being an Imp and the egg will return back to its original size once he is dead. 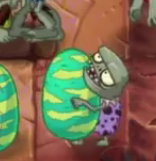 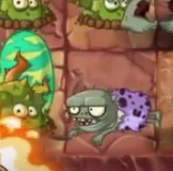 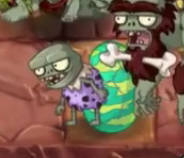 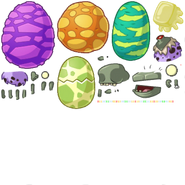 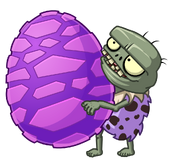 A shrunken Egg Stealer Imp
Add a photo to this gallery

Retrieved from "https://plantsvszombies.fandom.com/wiki/Egg_Stealer_Imp?oldid=2349111"
Community content is available under CC-BY-SA unless otherwise noted.