Eggs are environmental modifiers in the Chinese version of Plants vs. Zombies 2. An Egg Pusher Imp or Egg Stealer Imp can bring them onto the lawn. Depending on the egg, the damage they can absorb can range from 3000 to 6000, and it slowly damages itself by 75 damage every 0.25 seconds. It summons a baby dinosaur or an Eggshell Imp when destroyed. The baby dinosaur will cry and call an adult version of it within a few seconds of hatching. The adult version will cause different effects based on what type egg is broken. There are 4 eggs in total: the Pterodactyl egg, the Brontosaurus egg, the Eggshell Imp egg, and the T. Rex egg. In addition, the egg is also used as an armor for the Eggshell Imp. An egg can be removed out of the lawn only by using a Dinonip.

A baby pterodactyl is hatched 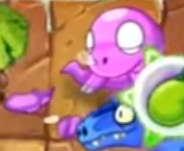 A baby brontosaurus is hatched

A baby T.Rex after hatched

A baby T.Rex rushing off the lawn

An Eggshell Imp is "hatched" (stage 1)

An Eggshell Imp is "hatched" (stage 2) 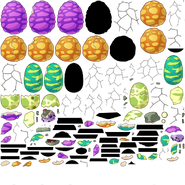 Textures for all types of Eggs

The shadow of a Giant T.Rex
Add a photo to this gallery

Retrieved from "https://plantsvszombies.fandom.com/wiki/Egg?oldid=2361183"
Community content is available under CC-BY-SA unless otherwise noted.