But you can just call me Crazy Dave.
EMPeach has different capitalization or spelling depending on what game it is in. When editing, use the term used in the game in question.

For other uses, see E.M.Peach (disambiguation).

N/A
More than just a robotic peach with a cute name, the EMPeach has been specially designed to stun Zombies, and especially Z-Mechs!

20 sec.
Shoots an E.M.Peach that stuns enemies and depletes Z-Mech fuel.
EMPeach (stylized as "E.M.Peach" in Battle for Neighborville) is the first ability for the Citron in Plants vs. Zombies: Garden Warfare 2 and Plants vs. Zombies: Battle for Neighborville. It stuns all zombies in a medium area, preventing them from using their abilities. It deals 10 damage on impact, and 5 damage for over 2-5 seconds afterwards.

When used on Z-Mechs, their abilities will be disabled for longer, and they take up to 60 damage.

It is based on the plant from Plants vs. Zombies 2 with a similar name and appearance.

It being an ability for the Citron is a nod to how they are both based on plants introduced in Far Future.

More than just a robotic peach with a cute name, the EMPeach has been specially designed to stun Zombies, and especially Z-Mechs!

Shoots an E.M.Peach that stuns enemies and depletes Z-Mech fuel.

The EMPeach works like the Engineer's Sonic Grenade. It takes time to start, but unlike the Sonic Grenade, it deals damage to zombies hit by it as well as stunning them.

Keep in mind that the stun effect from EMPeach can stop a zombie from using any ability and also heavily reduce their movement. This means that the hard-to-hit zombies such as Imp can easily be shut down due to its reliance on moving a lot and using its abilities. EMPeach can also cancel certain abilities such as the Turbo Twister, meaning that Citron can effectively prevent a rushing Super Brainz from quickly vanquishing him by stunning him.

Also, if you run out of ammo or overheat, this can be used as a last-ditch effort to vanquish your enemy.

The best way to counter this ability is to be unpredictable so that the EMPeach will miss its target. Engineers and Scientists can use their Jackhammer or Warp to avoid the EMPeach and punish the Citron for the brief period he is unable to fire after the ability. However, do note that if the EMPeach hits as a result of the player being too slow or dodging the wrong way, the ability will be canceled, wasting a use of the ability.

Super Brainz should attempt to zone the Citron out with the beam instead of approaching, as the EMPeach can stop him right in his tracks, allowing Citron to pile on heavy amounts of damage with a point-blank attack. If the player can successfully bait out the EMPeach, using the Heroic Kick to quickly cover the distance between the player and the Citron followed by the Turbo Twister to quickly shred through the Peel Shield if applicable and the Citron's health can net the player a quick vanquish.

Imps are especially susceptible in both modes, as the stun effect takes away the Imp's strength of high movement speed, while the Z-Mech is crippled by the effect for much longer. As the Imp, only attack Citrons if you have your Gravity Grenade ready, which disables the usage of the EMPeach as well as allows the player to easily circle the Citron, most likely netting a vanquish. In the Z-Mech, try and stay out of range of the EMPeach at all costs, shooting at the Citron from far away.

Old icon, as seen in the demo 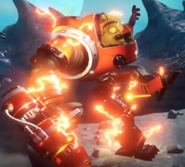 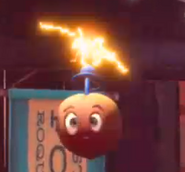 E.M.Peach's appearance in Battle for Neighborville