When this does damage: Conjure a Mustache.
Mustache Evolution: This gets +2

.
Determined to find every Mustache Monument in Hollow Earth, Neptuna brought in the experts.
Duckstache is a triassic super-rare zombie card in Plants vs. Zombies Heroes and a member of the

He does not have any traits, and his ability Conjures a mustache card every time he does damage, while his Mustache Evolution ability gives him +2

He is based on the famous actor and comedian Groucho Marx, famous for his sharp wit and iconic appearance of a thick mustache and eyebrows and round-framed glasses.

The duck he holds references the TV show You Bet Your Life which Groucho Marx hosted, in which a toy duck made to resemble Groucho Marx would descend from the ceiling and award the contestants $100 if they said out loud a secret word revealed to the audience at the beginning of the episode.

His name is a portmanteau of "duck," referring to the duck he holds, and "mustache," referencing his appearance and abilities.

Determined to find every Mustache Monument in Hollow Earth, Neptuna brought in the experts.

Duckstache may have underwhelming stats for a 3-brain card, but his Conjuring ability makes up for it. While Duckstache does not benefit the Conjured zombies in any way, a big part of Duckstache's usefulness lies in the value of mustache zombies in general; most mustaches are very cheap and useful, and even expensive ones can be a huge help. In fact, supplying mustaches is Duckstache's main role, helping out Mustache Waxers (and Dino-Roar cards) and establishing mustache synergy. Duckstache is also cheap, which fits the general strategy of mustache decks: starting the game off with cheap mustache rushes and ramping from there on. You can essentially say that he is a key zombie in a proper mustache deck.

Duckstache is best played early, preferably on turn 3 or 4 with an established setup involving mustache zombies (preferably Mustache Monument since it gives you card advantage and results in extra damage); playing Duckstache past turn 4 or 5 unless you are far ahead of your opponent would not fare well for your defenses.

Since he's also a pet zombie, he can also be paired up with Zookeeper and Cat Lady, with Zookeeper being able to boost his strength, but only Immorticia can do this normally.

Strikethrough trait, allowing him to Conjure multiple cards per attack (if there is at least one plant in front of him). They can also use Dr. Spacetime to reduce the cost of the Conjured cards.

The only real downside of Duckstache is that he is only made to be useful in one type of deck, that being mustache; while mustaches (supplied by Duckstache) are good in generally any deck, Duckstache needs the stat boost from his Mustache Evolution ability to actually be worthwhile. Therefore, you should only use Duckstache if you have enough cards to make a proper mustache deck.

Against a mustache deck, Duckstache is one of the cards you should worry about more. While he doesn't excel in offensive power, his ability allows him to behave as a fantastic utility card, offering draw and working in conjunction with everything else, even when he is played unevolved.

Taking him out as fast as you can is probably the best idea since he is, essentially, the key zombie in any mustache deck. 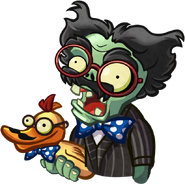 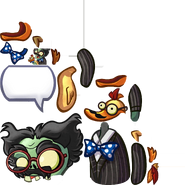 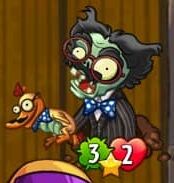 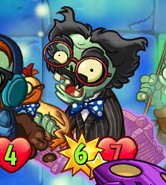 Duckstache activating his ability (both abilities use the same animation) 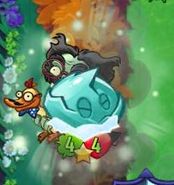 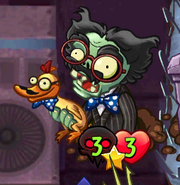 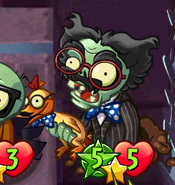 Unevolved Duckstache with a star icon on his strength 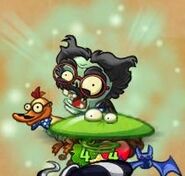