None
Recently promoted from Drum Minor.
Drum Major is a basic common zombie card in Plants vs. Zombies Heroes and a member of the

. He does not have any traits or abilities. His closest plant counterpart is Smoosh-Shroom.

He is based on a drum major, the leader of a marching band, drum and bugle corps, or pipe band, usually positioned at the head of the band or corps.

As a rather average zombie with no traits or abilities, Drum Major relies on his two tribes, dancing and sports, to make an impact on the field. This allows him to benefit from the abilities of Team Mascot, Zombie Coach, Aerobics Instructor, and Flamenco Zombie, creating synergy in decks with Professor Brainstorm and Rustbolt.

Outside of these two heroes, however, you might be inclined to replace him with other zombies, as Drum Major is, at best, a mediocre fighter without support from allies, like Vanilla.

Try to use powerful plants or stall with weak plants to destroy this zombie. Using tricks will also aid the plant hero in destroying this zombie. If your opponent is Rustbolt, beware the combination of Drum Major and Team Mascot.

If this happens, get rid of Team Mascot immediately, or try to go after Drum Major. This also includes when you are going against Professor Brainstorm, as he can use Aerobics Instructor and Flamenco Zombie to let Drum Major do severe damage. 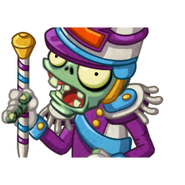 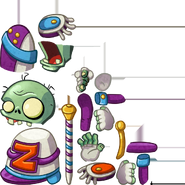 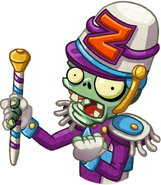 Lawnmower being played on Drum Major

Drum Major with the

Drum Major while Pecanolith is on the field

The player having the choice between Drum Major and Vanilla as the prize for completing a level before update 1.2.11
Community content is available under CC-BY-SA unless otherwise noted.
Advertisement