Can extinguish plants lit by Fireworks Zombies, can slow down surrounding zombies.

Can extinguish flames in a 3x3 area, but needs time to recharge.

As a member of the fire brigade, Water Lotus has extreme enthusiasm for extinguishing fire, down to the smallest flame, and always carries ice water for cooling down very hot objects.

Dripphylleia (滴水冰莲; pinyin: dīshuǐ bīng lián) is a plant in Chinese version of Plants vs. Zombies 2 introduced in the 2.6.0. update as the first plant unlocked in the Heian Age world, being unlocked after clearing Day 2.

It attacks by splashing water in a 3x3 area around itself. Water splashed by Dripphylleia extinguishes fire attacks and forms a small pond in its attack area which is able to chill zombies that walk in it.

Dripphylleia's petals will degrade after splashing water, when its petals fully deteriorate, Dripphylleia will disappear.

Dripphylleia is based on the flowers of the Diphylleia grayi plant, otherwise known as the Skeleton flower, whose white petals turn completely transparent when exposed to water.

Dripphylleia ice based abilities is a play on the Skeleton flower's Chinese name, "冰莲" (bīng lián), which translates into English as "Ice lotus".

When given Plant Food, Dripphylleia splashes water in a 5x5 area, as well as restoring its petals and allowing it to splash more water before disappearing. 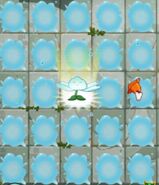 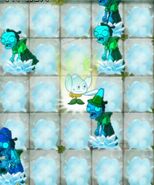 Dripphylleia is the first counter against Firework Zombie, so you must use it against this zombie. You also must use it wisely or otherwise the level will be more difficult if there are more zombies on the field. Remember that it will degrade and disappear after a few splashes, so it is recommended to plant at least three on a single column.

Unless you have its costume equipped, do not use it against Explorer Zombie, Torch Kongfu Zombie, or Torch Monk Zombie, as both its regular and plant food water puddle will not put out their torches. 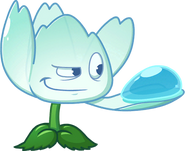 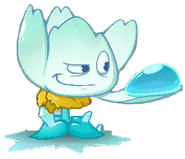 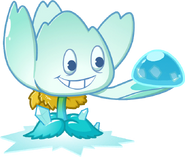 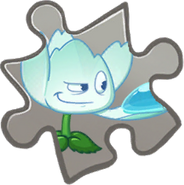 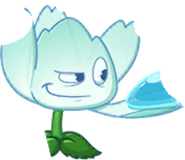 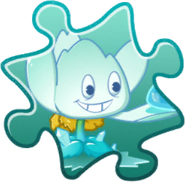 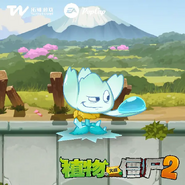 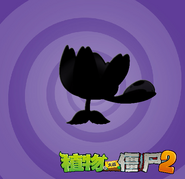 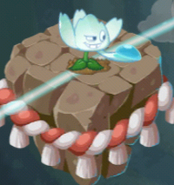 Dripphylleia on the Heian Age map 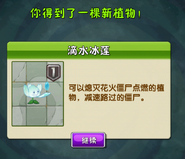 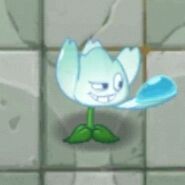 Dripphylleia on a News Banner

Dripphylleia on a second News Banner
Add a photo to this gallery
Retrieved from "https://plantsvszombies.fandom.com/wiki/Dripphylleia?oldid=2374170"
Community content is available under CC-BY-SA unless otherwise noted.