For the version in Plants vs. Zombies, see Dr. Zomboss.

Dr. Zomboss is a character in Plants vs. Zombies: Garden Warfare, Plants vs. Zombies: Garden Warfare 2, and Plants vs. Zombies: Battle for Neighborville, and is the ruler of all zombies. He commands the zombies to do tasks depending on the game mode. He also appears in various places in Garden Ops to make announcements to the plants, and, in Waves 5 and 10, use the Zomboss Slots, his slot machine, to decide which bosses will appear. He also seems to control a blimp which can be seen when playing Boss Mode, and also in Graveyard Ops to deliver zombies in various maps (as well as in the Backyard Battleground, as a portal to play Graveyard Ops).

After the events of Plants vs. Zombies: Garden Warfare, it was revealed that Zomboss has contacted his future self to take over Suburbia, and rename it Zomburbia, in which various other plants and zombies come from the past and the future. Zomboss also has Top Zombies, which are the ones used for best defense for Zomburbia in which he also gives the player sets of quests to become a Top Zombie.

The player has to talk to Dr. Patient first in order to find Zomboss' Secret Lab, which he's hiding in but needs the secret door finder. But with help from Gene Error, who tries to teleport the player to the plant base to obtain it. Once the player reaches his secret lab, he or she also receives a message from him about knowing what it takes to be a Top Zombie.

With the player acknowledged, he sends him to talk to the three classes of Top Zombies; Z-Mech 11011-3, Super Duper Brainz, and Ol' Deadbeard. The top zombies will give quests for the player, and when all are completed, they will reward the player with a badge and has to go back to the secret lab, and finally, talk to Dr. Fizzician.

Like Crazy Dave and Gnomus, Zomboss serves as the voice-over announcer for zombies giving them tasks. But, in Garden Warfare, he's depicted from his head sprite which is from the original Plants vs. Zombies, while in the sequel he is instead animated. In Battle For Neighborville, however, it has returned to having a normal head sprite, albeit with a new model.

Throughout Garden Warfare 2, Zomboss can be seen on screens talking whether it is his head sprite from Garden Warfare or in his secret lab. He is also seen in person in Zomburbia (when the zombies win the final mission of that map) where he gives a speech for the next batch of zombies graduating. 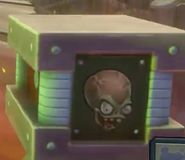 Zomboss' face on a box summoned by Boss Mode

Dr. Zomboss with other zombies on a stone mural 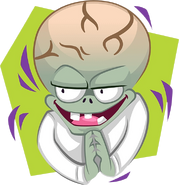 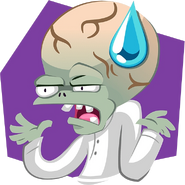 Crazy Dave and Dr. Zomboss on the Backyard Battleground introduction 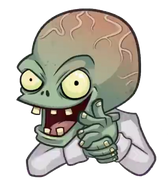 Dr. Zomboss icon that appears when you switch to the zombie sides 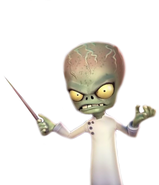 Dr. Zomboss giving a speech after the zombies have won the final objective of Zomburbia in Garden Warfare 2

Dr. Zomboss speaking to the camera in the trailer for Boss Mode

Dr. Zomboss in the plush version

Mission icon in Battle for Neighborville

Dr. Zomboss on a billboard in the Backyard Battleground 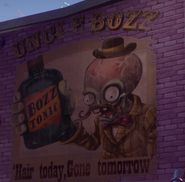 A poster featuring Dr. Zomboss in the Backyard Battleground 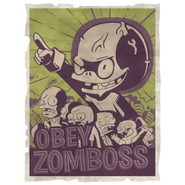 Official emoticon on Steam
Add a photo to this gallery

Retrieved from "https://plantsvszombies.fandom.com/wiki/Dr._Zomboss_(PvZ:_GW)?oldid=2319279"
Community content is available under CC-BY-SA unless otherwise noted.