Not to be confused with Mr. Toxic.

They call him Dr. Toxic because he's so toxic. His portable Reactor Pack and Radiation Blaster gives him a green aura that's hard to miss.

Dr. Toxic inflicts Plants with toxic damage just by walking near them!

His primary weapon is the Radiation Blaster. It poisons plants, dealing three damage to them every second for around five seconds unless they are hit by another toxic attack, in which case the duration is reset.

Yes! The Toxic Reloader is toxic. It reloads faster too.

Urbrainium Storage increases ammo capacity through enlarging the thing that holds the ammo.

By exposing the toxins to toxic materials, the damage output has been increased.

Dr. Toxic is great in objective gamemodes as just by being near plants, he damages them. Keep your team alive using your healing abilities and try to flank your targets. Running straight at your opponents is not recommeneded, as your small health pool means that you can be vanquished pretty quickly. If you want to get closer to them, use your warp. Your damage at long range is good, but always try to get right up in your opponents face for maximum damage. One thing to be aware of while playing as Dr. Toxic is that plants will notice when you are by them, so it can be harder to sneak by plants because your toxic aura will poison them, and they will probably notice you. If you don't want to engage in combat with plants, you should try to stay away from them.

Dr. Toxic is a tricky Scientist to get around. Try to keep your distance from him. If he gets too close to you, you will start taking damage (even if he doesn't shoot you) from his toxic aura. Shoot him from a distance where he is less effective and you should be fine. If you are a chomper try to ambush him from behind because, even though you will take toxic damage from being near him, you should be able to swallow him. 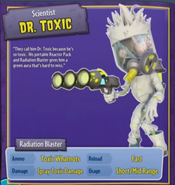 Retrieved from "https://plantsvszombies.fandom.com/wiki/Dr._Toxic?oldid=2356431"
Community content is available under CC-BY-SA unless otherwise noted.