Turns zombies around her invincible and heals them
Dr. Spork is a Zombie Battle Leader in Plants vs. Zombies: Battle for Neighborville. She resembles a Scientist wearing the "Commander S" Costume. Her special ability allows her to turn nearby zombies within a 6 m (19.69 ft) radius invincible and heal them by 30 HP every 0.25 seconds.

Due to Dr. Spork's ability to make nearby zombies invincible, it can be difficult to actually vanquish her, due to other invincible zombies in the way. Other than that, she doesn't have any other abilities, so it should be fairly easy to deal with her using any character classes. An interesting quirk about her is that she's vulnerable to Chomper's Burrow ability, so you can defeat her very quickly and easily with it and complete the battle. 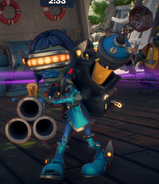