You Are Cordially Invited...

No Boloney, No Problem!
Ancient Knowledge
Yuck!
Finder of Doors

He eventually appeared in Plants vs. Zombies: Garden Warfare 2 as the zombie NPC who gives the player the first wave of zombie quests.

You are Cordially Invited

Dr. Zomboss is having a competition to see if any Zombie is intelligent enough to find his secret lab!

No Boloney, No Problem!

Track down a special secret door-finding device. Only it's lost, so...

The door finder is on, but it's out of power. Charge the door finder so that you may find the secret entrance to Dr. Zomboss' Lab.

The Door Finder is turned on, it's been charged, it's ready to find the door! 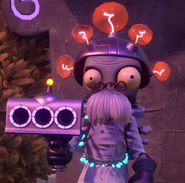