Anomalous Anomalies
Zomboss Needs You!
Strong Coffee
Top Zombie is You
Next Stop... Infinity
You Win and Stuff

Moderate
Dr. Fizzician is a deuteragonist for the zombies in Plants vs. Zombies: Garden Warfare 2. His appearance is identical to the Scientist but wears a hat, glasses, a mustache, but does not hold a Scientist's weapon. These accessories (except the fact that the regular Scientist weapon holds a weapon) are customizations one can put on his or her Scientist. Dr. Fizzician gives out quests for the zombies after the player beats the final zombies (Ol' Deadbeard, Super Duper Brainz, or Steve, depending on which course the player takes) final quest. His role is very similar, if not identical, to the Dave-bot 3000.1.

His name is a pun on "physician."

In his first mission, he assigns the player to go to Z-Tech Factory as something is interfering with the technology being developed there. After the player completes five waves, the Royal Hypno-Flower appears and uses Super Goatify on the player, turning them into a permanent Goat until the mission is over. The player must survive four minutes after they are turned into a Goat. 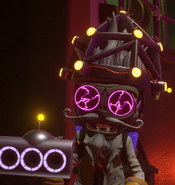