He also starts a mission in the Backyard Battleground, in which the player needs to find a note outside of his house in Zomburbia. The note tells the player to find ten hidden fish in locations all around the Backyard. Once the player finds all the fish, they are awarded with 25,000 coins and the Ribbit hat. 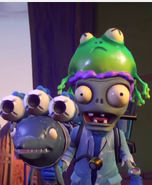