Not to be confused with Power Mints. 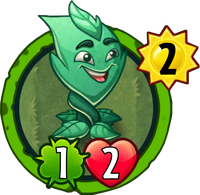 Start of Turn: Double this Plant's Strength and Health.
He'll grow on you. Just give him time.
Doubled Mint is a premium legendary plant card in Plants vs. Zombies Heroes and a member of the

. He does not have any traits, and his ability multiplies his strength and health stats by 2 at the start of each turn.

In the Boss Battle of the mission The Sack of Seedling City, Green Shadow starts with 2 Doubled Mints on the 2nd and 4th lanes.

He is based on the peppermint (Mentha × piperita), a hybrid mint which is a cross between watermint and spearmint.

His name might be a reference to Doublemint, a brand of chewing gum which is manufactured by the Wrigley Company. It also alludes to his ability, as he can double his own stats.

His name and ability, as well as his description, could be a reference to the fact that mint is known for its rapid growth, and even overgrowing gardens when left untended.

He'll grow on you. Just give him time.

Doubled Mint appears to be a gimmicky plant, doubling his stats every turn. However, he isn't very viable for multiple reasons. His low stats (which on turn 2 is a bad tempo play) mean almost everything that can be played from turn 2 onwards such as Bungee Plumber and Rolling Stone can destroy him before he can make any play. He is weak to

Deadly cards like Smelly Zombie and Barrel of Barrels, rendering his high health useless against them and losing the sun you used to boost Double Mint. He always need to be play alongside other cards such as Umbrella Leaf and Fertilize, restricting your deck a lot. Finally, in the case you did managed to boost him, bouncing basically also wastes him as it causes you to lose all the resource you put into him.

In short, this card is not competitively viable and should not be used in any deck whatsoever.

Doubled Mint's ability might seem like a huge threat but he's actually not much of an issue. His low stats for his cost mean Bungee Plumber, Dog Walker, and Rolling Stone can destroy him before he can boost himself. He is vulnerable to being bounced, messing your opponent's play, he is always weak to Deadly cards, and if somehow you couldn't manage to destroy him early game, Rocket Science and Cut Down to Size can do so.

Retrieved from "https://plantsvszombies.fandom.com/wiki/Doubled_Mint?oldid=2373428"
Community content is available under CC-BY-SA unless otherwise noted.