Can only fall after both cabins are destroyed.

Double-Cabin Aircraft Zombie dreams about "world tour" and "conquer the world" adventure. However, but the brothers never reached a consensus on this issue. "I can't communicate with a no-brained guy!" They are always grumpily complaining to each other.

Double-Cabin Aircraft Zombie (双舱飞机僵尸; pinyin: shuāng cāng fēijī jiāngshī) is the seventh zombie encountered in Sky City. They are a fast, high health plane zombie. When they reach the edge of the ship, they will ram on it, taking themselves down but doing huge damage to the ship. They occupy two rows and will slice any aerial plants that they come across with their propeller, much like a Zombie Fighter.

This is an extremely dangerous zombie. They will occupy 2x2 squares and they will also use their propeller to slice aerial plants and as a result, just like the Shell Zombie, they cannot be delayed by placing plants save for Saucer Squashes. Once they are near the player's castle, they will ram towards it and die, but will also do massive damage to the castle in the process. If there are no aerial plants in front of one of its lanes, they will start shooting. They have a lot of health and are also very fast, so it is very difficult to stop them from reaching the edge of your castle and doing massive damage, especially in later levels where around ten of these appear at once. Instant kills and powerful plant food effects are very useful against this zombie as well as Winter Melons and Bowling Bulbs, but swarms of this zombie will sometimes appear very early and there may not be time for one. Beware, as large numbers of this zombie ramming your castle may cause an instant loss. A Cycloque that is of a higher level than them can kill them instantly due to the upgrade ability.

This zombie will act as a boss in the second stage of this Brain Buster. They have more health than the Zombie Fighter and will also have 2 bullet stings instead of 1, and can kill the player easily if their reflexes are not good enough to dodge all their screen-clogging bullets, considering that the player would be low at health at the point he or she reaches them. What's worse, they will appear as a mid-boss in stage 3 of the Brain Buster and will most likely result in multiple continues if the player does not dodge the bullets fluently. 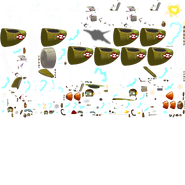 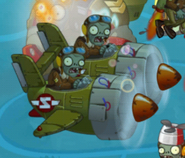 Retrieved from "https://plantsvszombies.fandom.com/wiki/Double-Cabin_Aircraft_Zombie?oldid=2361549"
Community content is available under CC-BY-SA unless otherwise noted.