But you can just call me Crazy Dave.
Doom-shroom has different capitalization or spelling depending on what game it is in. When editing, use the term used in the game in question.

For other uses, see Doom-shroom (disambiguation).
For the plant in Plants vs. Zombies 2 that shares the name of the Legendary version of this plant, see Perfume-shroom.

Doom-shrooms are extremely damaging but take time to regenerate.

Doom-shrooms are extremely damaging but take time to regenerate.

5 min.
Explodes damaging zombies in proximity, but defenseless when regenerating.

Doom-shroom (stylized as "Doom-Shroom" in Battle for Neighborville) is a Spawnable Plant in Plants vs. Zombies: Garden Warfare, Plants vs. Zombies: Garden Warfare 2, and Plants vs. Zombies: Battle for Neighborville. It was first added in the Garden Variety DLC update. It can be obtained from sticker packs. When zombies approach it, it uses its attack, Doom: an extremely powerful gigantic explosion that deals 200 damage. However, the drawback to this is that the Doom-shroom will then hide and become vulnerable while it "recharges" for about 30 seconds. Its zombie counterpart is the Explody Bot.

Doom-shroom had a functionally identical variant in the original Garden Warfare called the Cariboom released during the Feastivus event.

Some say the Cariboom is an ancient reindeer plant. We think he's just wearing a hat.

CLOSE RANGE: EXPLOSIVE
This lovely smelling shroom is dolled up and ready to go!

Explodes damaging zombies in proximity, but defenseless when regenerating.

This should be planted near the garden, as many zombies will focus on it and may not notice the Doom-shroom. However, a drawback is that when it is about to detonate, it will make a loud and quite noticeable sound, which can alarm some zombies. When it detonates, it will be vulnerable for about 30 seconds, so you should protect it until it is ready to detonate again. Doom-shroom is recommended to use in Night Maps. While it does not do much, its dark color will allow it to make it harder to see. This will surprise and kill any zombie that does not suspect a Doom-shroom to be in a flower pot. 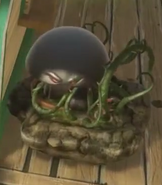 A Doom-shroom pot being covered by a Spiky Spikeweed

Doom-shroom's exploding animation
Add a photo to this gallery 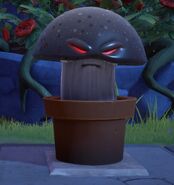 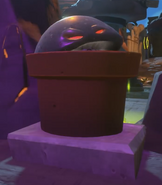 Perfume Shroom's explosion
Add a photo to this gallery 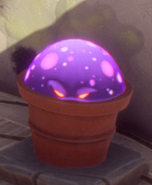 Doom-Shroom hiding
Add a photo to this gallery