For other uses, see Doom-shroom (disambiguation).

Destroy all Plants and Zombies with 4

or more.
"I could destroy everything you hold dear. It wouldn't be hard."
Doom-Shroom is a premium super-rare plant trick card in Plants vs. Zombies Heroes and a member of the

to play, and its ability destroys all plants and zombies on the field with 4

Its description is an excerpt from its Suburban Almanac entry.

"I could destroy everything you hold dear. It wouldn't be hard."

Untrickable), forcing you to trade your plants to save yourself.

While being able to destroy multiple powerful zombie fighters, such as Zombot Sharktronic Sub or Wannabe Hero with just 5 sun needed, it also destroys stronger plant fighters, such as Kernel Corn or The Great Zucchini, which can make this trick a mixed bag. Due to this problem, try to use this card as a last resort, when your opponent is overwhelming you with a multiple amount of stronger zombie fighters. This trick is best used to counter Zombot 1000, Bad Moon Rising, and Gargantuars' Feast. It can also work really well if you don't play multiple plants with 4 or more strength.

Generally, Citron and Beta-Carrotina are the best heroes to use Doom-Shroom with as most of their cards involve using plants with 3 strength or less, especially with a well-organized bean deck. Wall-Knight is also an option, as he has some powerful plants that have 3 strength or less, such as Power Flower and Briar Rose. When playing as Grass Knuckles or Spudow, however, consider carefully before putting Doom-Shoom into their decks as most of their decks involve high-strength cards or cards that can boost plants' stats. If you prefer to bring a card that can destroy zombies with the same amount of strength without any damage on your plants, Shamrocket is an alternative.

Avoid using this trick immediately after all your lanes have been filled with Cornucopia, as you may destroy that plant itself as well as some of the newly created plants with Cornucopia's ability. However, if you want to activate the abilities of plants such as Grapes of Wrath or Guacodile, this could be a good choice. Alongside, avoid playing this after playing plants boosted by Onion Rings since it will destroy all of them. Note that while Doom-Shroom does not affect

Untrickable plants, so using Umbrella Leaf to protect your plants from this is useless.

While playing as the zombie hero, this trick can easily punish the player for playing powerful fighters. It is important to be careful while facing against

Guardian heroes, as they might use this at any time and destroy your strongest zombies. Try to use powerful zombies with 3 strength or less, such as Barrel Roller Zombie and Foot Soldier Zombie.

If you need to deploy a strong zombie but also want to avoid the risk of Doom-Shroom destroying it, you can use Teleport or Teleportation Zombie to play it in the tricks phase or use Parasol Zombie to give your zombies the

Untrickable trait, but primarily only as a

Guardian hero, as there is a chance that your opponent will use this trick during the Plants Play phase, although it is a particularly difficult card for players to get. 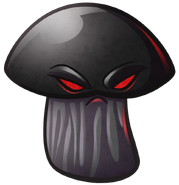 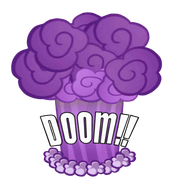 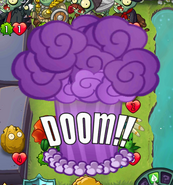 Doom-Shroom being the featured card in the menu for the July 19th, 2017 Daily Challenge
Add a photo to this gallery 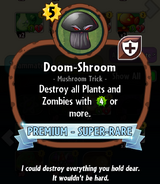 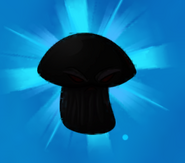 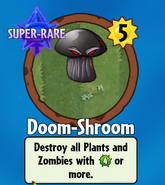 Retrieved from "https://plantsvszombies.fandom.com/wiki/Doom-Shroom_(PvZH)?oldid=2367264"
Community content is available under CC-BY-SA unless otherwise noted.