Donut Roller is a Theater Zombie in Plants vs. Zombies 3, which you first encounter at Floor 5 of Devour Tower. He rolls a giant donut that crushes plants along the board, and he also protects himself from any straight-shooting projectiles. Once he's defeated, his giant donut becomes an obstacle.

He is very similar in behavior to Barrel Roller Zombie from Plants vs. Zombies 2, excluding the Imps that come out of the barrel.

If attempting to break through the donut, using Blockbuster is recommended, as the donut will take extra Shatter damage from her attacks; Melon-Pult can also break through due to its Chilling damage type and high damage, but is less reliable when lots of Donut Rollers are present. 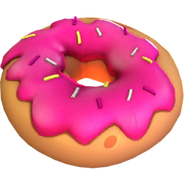