For the version in Plants vs. Zombies Heroes, see Dolphin Rider.

Dolphin Rider Zombies use dolphins to exploit weaknesses in your pool defense.

Fast, then slow (after jump)

Jumps over the first plant he runs into

(Ignores and gets dragged down as a result)

(Prevents him from jumping over)

(Can hit him from behind)

Level 3-8
Only appears in the pool
The dolphin is also a zombie.
Dolphin Rider Zombie is a zombie seen in Plants vs. Zombies. He is the 15th zombie encountered in Adventure Mode and the last zombie encountered in the Pool stage. He can be considered to be an aquatic variant of the Pole Vaulting Zombie as he can vault over the first plant he encounters with his dolphin, with the exceptions being that he moves significantly faster and ignores any plant in the rightmost squares of the water lanes, including Tall-nuts, that he can't leap over normally.

The sound that the dolphin makes before jumping.

The sound that the dolphin makes that signal his arrival at the lawn.

Before this zombie appears on the screen, a dolphin-like sound can be heard. This will help alert you to set up your defenses if you have not already. The best strategy for dealing with this zombie is to use Tall-nuts to block them, just as one might do for a Pole Vaulting Zombie. If you do not have a Tall-nut available, plant a Lily Pad in front of them to make them lose their dolphins, slowing them down. However, make sure you don't place it in the rightmost square, since the zombie will simply ignore it. If you have it, the Tangle Kelp is the fastest and the most economical way to defeat him, since he will simply run into the plant and as a result, gets dragged into the water.

Note: If the player has already planted a Lily Pad or other aquatic plant in the rightmost square, the Dolphin Rider Zombie will not jump over it, as the dolphin enters the pool partway into the second column. The player should plant one in the second or third column from the right, instead.

HD Dolphin without a background

The zombie jumping in water

The Dolphin's cameo in the "Zombies on your Lawn" video

A Dolphin Rider Zombie without his Dolphin

A Dolphin Rider Zombie that lost his arm

A Dolphin Rider Zombie dies with his Dolphin 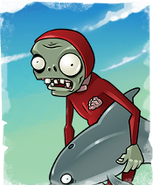 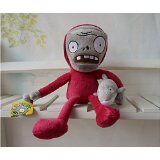 A Dolphin Rider Zombie jumping over a Lily Pad

Retrieved from "https://plantsvszombies.fandom.com/wiki/Dolphin_Rider_Zombie?oldid=2362522"
Community content is available under CC-BY-SA unless otherwise noted.