For the version in Plants vs. Zombies, see Dolphin Rider Zombie.

None
The dolphin is also a Zombie.
Dolphin Rider is a basic common zombie card in Plants vs. Zombies Heroes and a member of the

. He has the Amphibious trait and does not have any abilities. His plant counterpart is Cattail.

He is based on the zombie in Plants vs. Zombies with the same appearance.

His description is exactly the same as his counterpart's Suburban Almanac entry in Plants vs. Zombies.

The dolphin is also a Zombie.

Dolphin Rider is only an average zombie, but his main use is to dish out some good damage on the aquatic lane, which can be dangerous if your opponent does not have any Amphibious plants. While he will be targeted easily if you are against such opponents, you can improve his survivability by playing stat-boosting cards (which the

Beastly class has plenty of) so that he doesn't go down easily. Dolphin Rider can also be used in pet decks with Zookeeper and Cat Lady due to his tribe.

But if you are playing as Brain Freeze, you could substitute him out with Fishy Imp if you need an Amphibious glass cannon, as Fishy Imp is cheaper and in an extra beneficial tribe.

Dolphin Rider can easily chip away at your health, which can be troublesome. Fortunately, Dolphin Rider is easy to dispatch due to his low health. You could play Amphibious plants to fight Dolphin Rider, although all of them, excluding Marine Bean, won't be able to survive his attack unless boosted. But tricks and abilities, such as Whack-a-Zombie, Banana Bomb, and Shelf Mushroom, work too, so you aren't in too much trouble even if you don't have the former. 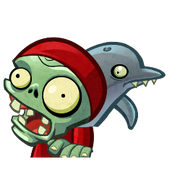 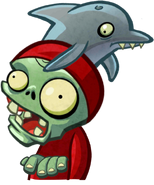 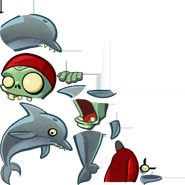 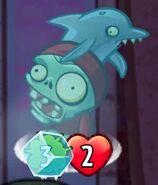 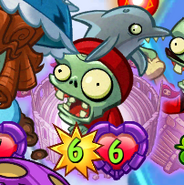 Sizzle being played on Dolphin Rider 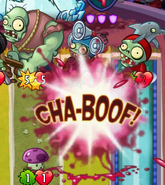 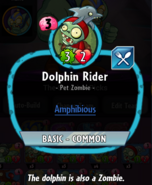