Dogwood is part St. Firnard, part Pineranian, a bit of Oaker Spaniel, and all "Who's a Good Boy?"

Unleashes a howl that stuns all zombies in both his lanes.

Dogwood is an Epic Support Tree plant introduced in Plants vs. Zombies 3. He barks at zombies to slow them down, as well as neutralizing Dog Walkers.

Dogwood is the first Tree the player obtains, being unlocked after beating Floor 9 of Devour Tower.

He costs 4 sun and barks at any nearby zombies, slowing them down in any nearby zombie in any of the lanes he occupies. He is also able to make Dog Walkers turn around and leave the lawn after they attack Dogwood once.

Being a Tree, he occupies two tiles vertically, can't be moved or stolen, and can block off flying zombies.

Dogwood is based on the dogwood, any of about 30–60 species of woody plants from the genus Cornus in the family Cornaceae; and the dog (Canis lupus familiaris), a subspecies of the wolf. Dogwood's name and canine appearance in a pun on the plant and animal he's based on.

The species of dogwood that Dogwood most resembles is the flowering dogwood (Cornus florida), a species of dogwood native to eastern North America and northern Mexico, more specifically Dogwood resembles the "Amerika Touch-O-Pink" dogwood, a cultivar of the Florida flowering dogwood (Cornus florida subsp. florida) subspecies known for its bright pink flower petals, due to Dogwood's bright pink "fur".

The dog breed that Dogwood most resembles is the poodle, due to the fact that its "fur" is most prominent on the tips of his "ears" and "tail" as many poodles are portrayed with. Like Dogwood, many poodles in fiction and real life have also been shown with pink fur.

Dogwood's almanac entry contains many puns and portmanteaus of dog breeds and tree species; namely: St. Bernard and fir, pine and Pomeranian, and oak and Cocker Spaniel. Weirdly, there is no poodle.

His splash screen description is a reference to the term "man's best friend," a tag usually given to dogs due to their history with humans, with "man" changed to "Zombie," and the "best" changed to "Worst", referring to the fact that it is against zombies.

Dogwood's Plant Food ability is named Howling Mad, Dogwood will unleash a loud howl which stuns all zombies on screen for a brief amount of time.

Dogwood's Tacobility is named Beware of Dog, Dogwood will now be able to attack zombies that get too close by biting them. 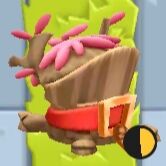