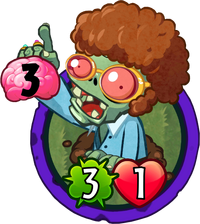 Backup Dancer.
Disco is undead.
Disco Zombie is a basic common zombie card in Plants vs. Zombies Heroes and a member of the

. He can also be made by Disco-Tron 3000. He does not have any traits, and his ability makes a Backup Dancer on a selected lane when he is played, unless all other non-aquatic lanes are already occupied.

He is based on the redesigned dancing zombie in Plants vs. Zombies with the same appearance.

Disco Zombie's high strength compared to his low health means that he functions as a glass cannon to defeat or heavily damage your opponent. He can also make a Backup Dancer to either be used as a weak shield to block an attack from a plant or to land 1 extra damage to your opponent. As Disco Zombie is essentially 2 zombies in one card, it is a good way of providing zombies for swarm decks like dancing decks and Valkyrie decks, and can even be used to help fill the lanes for a more powerful Zombot's Wrath. While it can charge up your opponent's Super-Block Meter more easily, you could use the Backup Dancer to waste the opponent's Super Block, so something like Gas Giant or Moon Base Z can do their job better.

However, any plant or trick that does at least 1 damage can destroy it. You should watch out for Sour Grapes, Kernel Corn, and Galacta-Cactus as they can destroy both Disco Zombie and Backup Dancer without directly engaging them in combat. However, Z-Mech and Electric Boogaloo can use tricks like Camel Crossing and Vitamin Z respectively to give Disco Zombie and Backup Dancer more health, letting them stay alive and do more damage. Alternatively, you could intentionally destroy them with Fireworks Zombie, Barrel of Deadbeards, or Gas Giant to boost Valkyrie. Final Mission can also work nicely.

As Impfinity, you can use In-Crypted, Firefighter, or Mixed-Up Gravedigger on Disco Zombie in order to make another Backup Dancer.

Despite the fact that the Disco Zombie does 3 damage per attack, he has only 1 health, so he can be destroyed easily. Any plant that can block his attack and fight back can destroy this zombie, along with tricks like Water Balloons and Berry Blast. Sour Grapes and Galacta-Cactus (if destroyed) are the most effective counters to this zombie, as they destroy both Disco Zombie and the Backup Dancer he makes at once.