Disco Zombie spreads disco mania wherever he goes. If only Disco wasn't so catchy, many platform soles could've been saved.

Disco Zombie is a Nightclub Zombie in Plants vs. Zombies 3, which you first encounter in at Floor 11 of Devour Tower. He will dance across your lawn, summoning four Backup Dancers in a cross formation every 10 seconds.

He is based on the Dancing Zombie, who has the same ability and appearance of the original game. He slightly resembles Disco Stu from The Simpsons animated sitcom series.

Although it has low health, the Backup Dancer constantly summoned in front of him protects him from plant attacks. Use piercing plants like Night Cap to damage him even when he summons more Backup Dancers. Pine Needler at first appears to be a great choice against Disco Zombie, as her Tacobility "Looking Sharp" allows her to hit all 4 Backup Dancers and the Disco Zombie (so long as the one in the front is alive), but due to her being a

Chilling type and the Backup Dancers and Disco Zombie being

Electric types, she does less damage against them, making her a poor choice. Spikeweed is a cheap yet effective counter to both Disco Zombie and his Backup Dancers. Two or even one column of Spikeweeds can easily kill both zombies, due to Spikeweed being 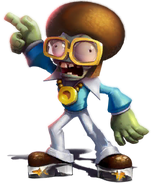