This boss can be very easy to deal with. When he uses Disco Stick at a distance, find a place to hide or tank the shots with Citron's Peel Shield. Always move away because if he gets too close he will unleash Disco Whirlwind and become invincible for a period of time while also being able to vanquish the plants quickly. When he finishes the attack, he will be left stunned for 5 seconds, giving the perfect chance for plants like Peashooter, Sunflower and Kernel Corn to unleash their deadliest abilities. The best plant in overall to counter this boss with, is Citron, as he takes no knock-back damage at all when in Ball form, therefore allowing a Citron player to use the Ball form in order to let him waste his Disco Whirlwind attack. The worst plant to take him on with is Chomper because, when you get too close, his disco whirlwind will activate, doing massive damage to you. As for your abilities, Spikeweeds do not work him, hence him being a boss. Also you cannot swallow him, because he is a boss, but you can still use Burrow to escape from him or heal a tiny bit of health.

When the slots land on three Disco Zombies, an animation will show with spotlight turning on in a dark room. Then, the disco ball appears from the floor, and Disco Zombie unearths himself. He then summons four Backup Dancers and gets out of the hole. Then he kicks the stone near the hole and whirls in dance. The recorder then comes out of the hole and Disco Zombie grabs it. The cutscene ends and the boss fight begins. During a Super Disco wave, Backup Dancers will appear often, replacing Browncoat Zombies (in Garden Warfare 2, there are also customized Imps).

Disco Zombie proves to be easier than other elite bosses in Plants vs. Zombies: Battle for Neighborville. At first, he seems like any other Disco Zombie, but every time a quarter of his health is gone, he will start spinning, making him invincible. You will have to lure him to a gramophone. Upon getting near the gramophone, he will stop spinning, making him vulnerable again. The players only have 10 minutes to defeat him. Not doing so will result in a game over.

A Disco Zombie using his spin ability to beat a Sunflower

Disco Zombie in the first gameplay 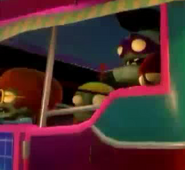 Disco Zombie on a bus with Super Brainz and Imp, confirming his appearance in Plants vs. Zombies: Garden Warfare 2 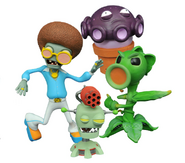 A Disco Zombie figure with a Gatling Bot, Peashooter, and a Gloom-shroom-like Toxic Gloom-shroom figure 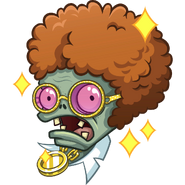 His icon in Plants vs. Zombies: Garden Warfare 2

Elite Disco Zombie splash screen in Plants vs. Zombies: Battle for Neighborville
Add a photo to this gallery 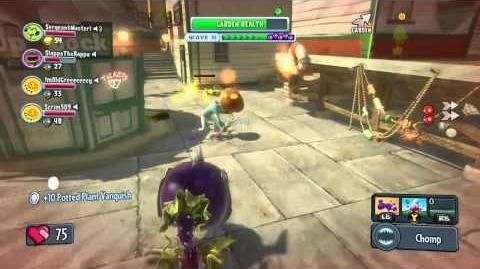 Retrieved from "https://plantsvszombies.fandom.com/wiki/Disco_Zombie?oldid=2358888"
Community content is available under CC-BY-SA unless otherwise noted.