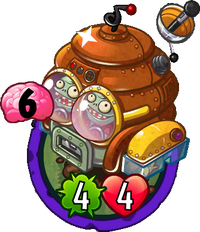 When revealed:
Make a 3

Disco Zombie that makes a 1

Disco-Tron 3000 is a premium super-rare zombie card in Plants vs. Zombies Heroes and a member of the

. It has the Gravestone trait, and its ability makes a Disco Zombie on a selected lane when it is revealed, unless all other lanes are occupied.

Disco-Tron 3000 is a good way of getting many zombies on the field, especially in a dancing or rushing deck. If there are not many zombies on the field, using this is recommended to help pressure the plant hero, especially when they have dangerous plants on multiple lanes. Using zombies that boost other dancing zombies is very useful in conjunction with this zombie. You can play it, then play Flamenco Zombie to easily do 8 damage to the plant hero, but that is only if all of the zombies manage to survive, which is unlikely. If you want to do the combo in one turn, you can only do so starting from turn 7, since Disco-Tron 3000 will not be revealed from its gravestone until the Zombie Tricks phase. Using this in tandem with Unlife of the Party will let the latter gain +3

if all other ground and heights lanes are unoccupied.

Disco-Tron 3000 now has the Gravestone trait, which allows you to plan where to make Disco Zombie and Backup Dancer after the Plants Play phase. It also prevents them from being destroyed this turn with exception of Grave Buster.

The only thing you may need to be careful is that it is not in the Imp tribe, despite the fact that there are Imps inside. If you are playing as Impfinity, just note that Imp Commander or Toxic Waste Imp do not benefit Disco-Tron 3000 in any way. However, he can use this with Mixed-Up Gravedigger or In-Crypted to reuse Disco-Tron 3000's ability. Since Disco-Tron 3000 now has the Gravestone trait naturally, Impfinity can also slightly boost it with Headstone Carver.

As for Electric Boogaloo, you can combine it with Synchronized Swimmer and Flamenco Zombie to potentially do 10 damage to your opponent on turn 7.

Once this is used, beware. This is because the zombie hero could quite easily pull out any dancing zombies or leave those on the field to do quite a bit of damage early on. Using cheap plants can work, particularly against Backup Dancer and Disco Zombie, as both have low health. Sour Grapes can destroy Disco Zombie and Backup Dancer easily, leaving Disco-Tron 3000 has a 4

. Additionally, cards that do damage to multiple zombies at once, such as plants with the Splash Damage trait, such as: Snapdragon or Winter Melon, plants with field-clearing abilities like Sour Grapes or Kernel Corn, or tricks like Cherry Bomb can effectively deal with it and the other zombies it makes.

However, Disco-Tron 3000 itself should be combated with a better plant, such as Smoosh-Shroom or Smashing Pumpkin. And because this zombie has the Gravestone trait, you cannot do anything during the turn it is played unless you have Grave Buster.

Do not Bounce Disco-Tron 3000 unless you think it is a good play, as the zombie hero can replay it and make more zombies.

Retrieved from "https://plantsvszombies.fandom.com/wiki/Disco-Tron_3000_(PvZH)?oldid=2376673"
Community content is available under CC-BY-SA unless otherwise noted.