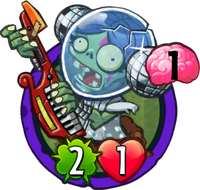 Bullseye.
Nothing focuses your aim like the super-sick wailing of a space keytar solo.
Disco-Naut is a galactic super-rare zombie card in Plants vs. Zombies Heroes and a member of the

. She does not have any traits, and her ability gives all zombies with 2

or less, including her, the

Bullseye trait. This ability persists until all Disco-Nauts are removed from the field.

She is based on an astronaut, a person trained by a human spaceflight program to command, pilot, or serve as a crew member of a spacecraft. Her being disco-themed may be a nod to space disco, the fusion of disco music with futuristic themes, sounds, and visuals which became popular in the late 1970s.

Her name is a portmanteau of "disco," referring to her appearance and dancing tribe, and "astronaut," the real-life people she is based on.

Nothing focuses your aim like the super-sick wailing of a space keytar solo.

This zombie is particularly useful for swarming your opponent with low-strength zombies since they will not charge up their Super-Block meter, excluding

Anti-Hero zombies due to their temporary strength boost putting them out of range for her ability to affect them. Low-strength zombies with the

Strikethrough trait or a damaging ability appreciate her ability even more, as they are guaranteed unblockable damage to your opponent as long as they have 2

or less. However, Disco-Naut (and rush decks in general) becomes less useful as you go later in the game, so ending the game early should be your top priority. Disco-Naut is also hard to keep alive due to her low health and the fact that the Crazy class lacks health-boosting cards.

Where Disco-Naut truly shines is in burn decks, where your main purpose is to just target the Plant Hero and nothing more. In these scenarios, the

Bullseye she provides can make any small fighter do tons of damage without worrying about the opponent blocking your attacks, so you can do huge damage in one turn.

Bullseye trait. Aside from dancing synergy, she goes well with Binary Stars since they will allow low-strength zombies to do up to 4 unblockable damage to your opponent each.

You should also avoid boosting zombies with this, because any strength boosts will remove the

Bullseye trait from zombies with 2 base strength. It is recommended to play her in the rightmost lane, so that in the Fight! Phase more zombies can take advantage of her ability.

You must also watch out for Devour, Whack-a-Zombie and Chomper, as they can take her out instantly.

Statwise, this is an average zombie. As she has one health, almost any plant can take her out. However, the fact she does not charge up your Super-Block Meter means that she must be dealt with as soon as possible, especially if your opponent has Binary Stars or swarms of low-strength zombies.

Bullseye trait from the other zombies, but beware, as she can be played again easily due to her low cost. If she is played on the first turn, Morning Glory and Banana Bomb can take her out easily.

Due to her low strength and health, you can resort to instant kills like Whack-a-Zombie, Devour and Chomper. 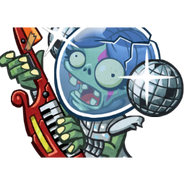 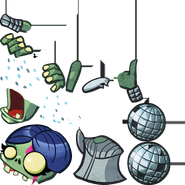 Disco-Naut attacking from the player's point of view 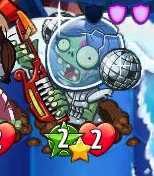 Disco-Naut with a star icon on her strength

Disco-Naut attacking from the opponent's point of view 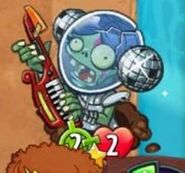 Gigantic Disco-Naut due to a glitch 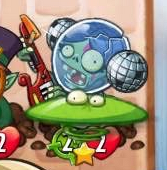 Spring Bean being played on Disco-Naut 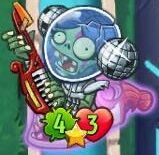