Plants vs. Zombies Wiki
Register
Don't have an account?
Sign In
Advertisement
in: China exclusive, Archived, Zombies,
and 7 more
English

Creates small patches of quicksand in his lane.

Ancient Egypt
Summons Quicksand Zombies, allows other zombies to eat your plants faster.
Desert Death Zombie (沙漠死神僵尸, pinyin: shāmò sǐshén jiāngshī) was a zombie that appeared in Ancient Egypt in Plants vs. Zombies Online. His special ability was that he created small patches of quicksand five tiles long in the lane he was in and the two adjacent lanes to himself. Any zombie coming into those lanes slid quickly into the lawn, similarly to the Zombie Bobsled Team. The patches of quicksand also killed the player's plants. However, the quicksand disappeared after a while.

An image of Desert Death Zombie in a dark background 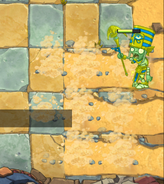 After using his special ability 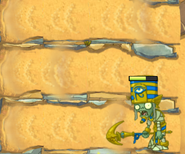 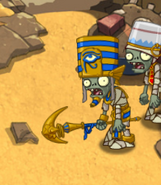 A shot of the Desert Death Zombie with another zombie 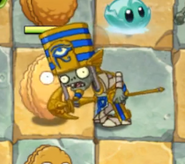