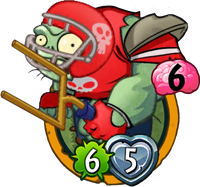 more.
Somebody once told him the best defense is a good offence. He disagrees. Da fence he like best is da one he SMASH through.

Defensive End is an event zombie card in Plants vs. Zombies Heroes and a member of the

Armored 1 trait, and his ability increases the cost of all plant tricks by 2

. This ability stacks with each Defensive End on the field and persists until all Defensive Ends are removed from the field. His closest plant counterpart is Dark Matter Dragonfruit.

He was introduced in update 1.10.22, along with Template:PvZHLink and Fire Rooster. He became craftable in update 1.12.6.

He was made available in the Backyard Brain Bowl event and was available from 31 January 2017 to 7 February 2017.

His appearance is a mix of All-Star Zombie and Gargantuar, and he appears to be holding a field goal post, which is what football players must kick the ball through to score points from field goals.

The term "defensive end" relates to a player position in American football, located on the defensive line. They are traditionally used to counter running plays by the offense that could allow it to evade or slip through the defensive line.

Somebody once told him the best defense is a good offence. He disagrees. Da fence he like best is da one he SMASH through.

Defensive End has decent stats and an ability that is extremely useful against any plant hero, especially those who tend to focus on tricks such as Captain Combustible and Template:PvZHLink. His

Armored 1 trait is also a small bonus, reducing damage on every attack and nullifying anything that does 1 damage.

All Hearty heroes can play him on turn 4 with two Template:PvZHLinks or a Gargologist, restricting your opponent's options on tricks even further. Rustbolt can play this on turn 3 much easier thanks to his methods of gaining extra brains with the help from his

Due to him being in the sports tribe, he can be protected by Zombie Coach or boosted by Team Mascot at the start of each turn. He also has Gargantuar synergy with Smashing Gargantuar, Supernova Gargantuar, and Wizard Gargantuar, all three allowing him to be more offensively threatening, and Gargologist can lower his cost so that he can be played earlier. But regardless of synergy, he can work in any Hearty deck in general due to the sheer usefulness of his ability.

Defensive End, however, cannot do anything against early tricks (up to turn 5, to be precise); even if you lower his cost and play him earlier, some tricks are still worth it even if their cost has been raised, namely superpowers and instant-kills, so do not expect your opponent to completely give up on tricks. Also, his ability's usefulness diminishes later in the game, as there will be enough sun for your opponent to play tricks even if they have become more expensive. And finally, you should note that his ability does not affect environments.

This zombie makes it harder for you to play tricks, as all trick cards in your hand cost 2 more sun. In this case, you have to resort to strong plants to deal with him. Tough Beets is a good counter against this, as it can be played on the turn he is played, possibly surviving while destroying Defensive End in a single attack. Cheaper options include Template:PvZHLink, or the tricks mentioned above. In general, try to avoid using tricks as you may not have enough sun to weaken or destroy Defensive End as well as other strong zombies, and rely on strong plants in general to stop strong zombies.

, which will remove his ability.

Solar hero, you can simply overcome his ability by creating excess sun or playing Smashing Pumpkin in the same lane as Defensive End to destroy him at the same price. However, you must also watch your sun-producing plants so they won't be destroyed. Also, if you are using a flower deck, you can play Briar Rose along with cheap flower cards such as Morning Glory in the line of Defensive End to destroy it.

If possible, rely on powerful environments like Template:PvZHLink of The Red Plant-It instead, as environments are not affected.

Retrieved from "https://plantsvszombies.fandom.com/wiki/Defensive_End?oldid=2228407"
Community content is available under CC-BY-SA unless otherwise noted.