Defcorn 5 is an achievement that can be unlocked on the iOS, Android, Nook, PlayStation 3, Xbox 360, and PlayStation Vita versions of Plants vs. Zombies. In order to complete it, the player must have five Cob Cannons in a single level.

Its name is a reference to Defcon, or Defense Readiness Condition, which is a scale of alert for the U.S. Armed Forces. Ironically, Defcon 5 is actually the lowest state of emergency, while five Cob Cannons in a normal Adventure Mode level is somewhat overkill, meaning the zombies may not be that threatening.

As five Cob Cannons require 3500 sun (much more in Survival: Endless because every time you plant one, the sun cost is increased by 50 sun), it is suggested you play the first Day level, as it contains only normal

Zombies and it is also easy to beat. It's also possible to use this in Survival: Day. Use Garlic in every other lane (one, three, and five) to force the zombies into two rows, placing three Spikeweed behind them to incur damage. This will allow you to build up three rows of unthreatened Sunflowers. Whenever the Cob Cannon charges, you can shovel up two Sunflowers and plant another Cob Cannon.

You can easily get this achievement in Last Stand as you start with 5000 sun, enough to plant six Cob Cannons and two Wall-nuts in front of each.

It is not necessary to complete the mini-game to earn the achievement.

Note: If there are Gargantuars in the level, you can also get the achievement Popcorn Party in the process.

Use the following plants:

When you reach the final wave, try to take out all the zombies in every row except one (one that has a Cob Cannon in it). Leave one or two zombies in that lane and immediately remove all Peashooters or Cabbage-pults. Now nothing should be attacking the zombies left in the lane, and they should be noshing away on the Wall-nut or Tall-nut (and Pumpkin, if you have one). It is best to have only one zombie left, as this will reduce the Wall-nut's or Tall-nut's rate of deterioration. Now steadily collect the sun produced by your Sunflowers, occasionally re-planting a Pumpkin or planting a Wall-nut or Tall-nut over the previous one. Upgrade your Kernel-pults to Cob Cannons when you have enough sun, use a corn cob missile to take out the remaining zombies when you have all five Cob Cannons, and then you are done.

Because 5000 sun is given at the start and only 3500 is needed to plant five Cob Cannons, all you really need to do is plant ten Kernel-pults and then upgrade them to Cob Cannons. You do not even have to start the Onslaught, so you can start a game, build the five Cob Cannons, then leave. 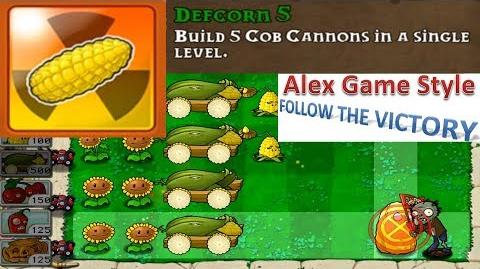