Use the water to your advantage. It is advised to take plants like Spring Bean (to deal with Swashbuckler Zombies, Gargantuars and various others), Spikeweed, Spikerock, or both (to deal with Barrel Roller Zombies and delay Gargantuars, Imps that are launched by the Gargantuar Pirates), Winter Melons (to slow down groups of zombies), and Kernel-pult (to deal with Seagull Zombies and delay Gargantuars) as quickly as possible. Potato Mine is advised to make it possible to plant a whole column of Twin Sunflowers without using regular Sunflowers first. Repeater and Threepeater are good plants to dish out damage over a long range, each in a different manner of the other. Snapdragon and Spikerock can be used to deal area of effect damage over a short area. Primal Peashooters can knock zombies into the water. Use that knowledge to your advantage to easily take care of Swashbuckler Zombies and Imp Cannons. Finally, the Coconut Cannon and Cherry Bomb serve as the instant kills. As for the Imps launched by the Gargantuars, Spikerocks, Spikeweeds, and such are placed in the third column with bridges. Blovers can be used to blow away Swashbuckler Zombies, Seagull Zombies, and Zombie Parrots, so the sooner you can get them, the better.

Additionally, Sun-shrooms are also a good plant to bring on this level because not only it is cheap but it will somewhat hasten your sun production more quickly than using a Twin Sunflower for an exchange. Best if you could combine both. One column of Sun-shroom and a few rows of Twin Sunflowers will also yield you a good sun production processing. With that, you can easily build as many Winter Melons as you can and some Magnifying Grasses. Primal Sunflowers are also good.

When the player is picking plants, the is an exploit which can change both the position and number of planks and types of zombies that will be in the next level. The exploit involves opening the Zen Garden from the plant selection screen, then return, and both of those things will be changed.

No any $ premiums needed.

Note: This strategy does NOT work with Imp Cannons and a level with four rows of plank unless you have Iceberg Lettuce boost or Kernel-pult boost .

(if you have its boost)

is required and anything else to fill in.

If you choose a level with Imp Cannons, then go to the garden and quit. Otherwise you will be ruin for yourself during the game.

Collect Blover as early as possible. Plant Sun-shroom or Twin Sunflower at the rows that do not have planks. Use Stunion to delay the first zombie and use Plant Food on Sun-shroom to gain more sun to plant Winter Melon.

When Gargantuar Pirates appears, try to plant another Winter Melon to slow him down and using Chard Guard plus Blover to defeat him quickly as possible.

HINT: If you see Swashbuckler Zombie or Seagull Zombie or Zombie Parrot, just use Blover to simply kill it fast.

You need at least two Winter Melons each rows that has planks. When you see a horde or Gargantuar Pirates, first, slow them down using Winter Melon or its splash damage, Stunion]] or Hurrikale, second, use Chard Guard plus Blover to kill them.(If it has Barrel Roller Zombie, use Cherry Bomb to kill it first then plant Blover to prevent the Imp Pirate Zombies thrown by Gargantuar Pirates to land.)

Hurrikale should be used when there is a horde of zombies to delay them.

Keep planting Winter Melons until your sun has run out or no more space left on the lawn.

This strategy can use all the way to Level 600+. More information, see gallery.

Caution: Do not use Plant Food too fast otherwise the game will crash.

Before using this strategy, use a different strategy until you get the extremely needed plants and Magnet-shroom on the Endless Zone.

Start your Sunflower Column in the back, plant two or three Sunflowers to start. Slow down the first few zombies with Stallia, and defeat them with Snapdragons. By the last wave, you should have three columns of Snapdragons, but start in the third column with planting the Snapdragons.

Use Blovers on Seagull Zombies, Zombie Parrots, and occasionally Swashbuckler Zombies. Endurians can be placed infront of the Snapdragons (in the fifth column). Use Ghost Peppers to attack zombies, especially Gargantuars. When Gargantuars are in two Snapdragons' area, then use Plant Food on both on them. Do not forget to finish your Sunflower column and replace them with Twin Sunflowers if possible. If you have your Plant Food bar full and there is another Plant Food floating, quickly use Plant Food on a sun-producing plant and collect the floating Plant Food. If there is no Swashbuckler zombies or Seagull Zombies, plant four columns of Snapdragons instead of three. If there is too much Barrel Roller Zombies in a Snapdragons' area, feed Plant Food to the Snapdragon.

Unlike the Spanish Invincible Armada, which was a pathetic invader that ended in failure, this one is a defender that is meant to make the dead 'deader' (there is no such word, mind you)...provided you have quick reflexes, the ability to comprehend five overcrowded lanes all at once, and extreme carefulness despite your speed.

Remember not to forget a single plant on the seed selection screen, most especially Blover. And keep exiting the level if a Gargantuar is there until it disappears (but if you choose to fight it, go on, I would love to see someone dare). Ignore both these precautions, and you're screwed.

Start by destroying the early comers with Potato Mines/Chili Beans, planted as much as possible on the leftmost lane. Feed the stronger zombies (e.g. a Buckethead) with a Sun Bean. The sun-producers can then fill the plankless rows, because they're safe from any form of attack (except from Imp Cannons, but if you have one Magnifying Grass per row behind all those sun-producers, the cannons can simply be blasted to mush) as long as you quickly plant Blovers when needed and/or predicted.

As for the lanes with planks, quickly fill them with Winter Melons at the back, Laser Beans in front of them. Conquer all the other tiles with these until there's nothing left of the lawn to conquer (if that is so, dig up one sun producer, and the empty tile it leaves behind will be where you plant Blovers). Slowly replace the Laser Beans with Winter Melons, until the whole lawn is full of them cyan melon catapults.

And once that happens, watch the undead lose their heads before they can even step on the lawn (I mean it!)! Watch the occasional dropping coins, sprouts, and, most especially, gems, which may fall from decapitated zombies. When you see an extra plant food that will not fit anymore in your full plant food bank, use it on a Winter Melon to witness mass destruction - a massacre!

Do not worry about using power-ups or spending 1000 coins for extra plant food if you make the wrong moves or if the level is too fast for you to even produce enough sun (but don't go overboard with it!).

Going on this same strategy over and over again is a bit boring...but if you want to survive (forever?) and remain a living human with a brain, just do it!

This strategy requires the use some bought premiums. A free strategy is coming sometime next year.

What you will need

Plant a Primal Sunflower. Feed it with all of your Plant Food. If a Primal Sunflower is ready to be planted in the middle of feeding, plant it and feed them both. By now a zombie should be on your ship. Kill it with a Winter Melon on the fourth column and then start plating them on all of the rows of that column. For water rows, plant one on the third column too. At the Same time, you should be planting Primal Wall-nuts on the fifth row. They will protect you from zombies eating and Gargatuar smashes. Heal them whenever possible. You should also be planting a Spring Bean on the third column and spam Power Lilies. When things get tough, Plant Food your Spring Bean and Plant a Blover immediately afterwards. You can use the Hurrikale to push zombies back if you do not want to use a Splover yet. Make sure you end the level with five Plant Food.

-Blover (crucial in removing parrots, swashbuckler and gargs; imps if you are fast)

-Moonflower (or primal sunflower if you have Plant Food)

-Hurrikale - only gem premium (stalls cannons-halves firing rate; blows zombies back to create an 3*3 slow opening for the next plant)

Step 1) plant moonflower-those who have it shld know how to use it. not elaborating. use chard guard to slow first zombie

Step 2) if next zombie is a cone/bucket, use Primal mine to destroy group. chard chard shld have hurled first zombie with the others. shovel chard guard. if barrel is next zombie, do PPM (same as previous to destroy first zombie) and use chard guard on barrel and use Blover( be fast or barrel will only be hurled backwards, not blown away

Step 3) get first two columns to have Moonflower ( or Primal SF) and third and fourth columns to have winter melons. stall zombies with chard guard + blover. when gargs hurl imps (in slow motion due to chill from winter/hurrikale) get ready blover and put it b4 he swing out his arm

Step 4) eliminate row by row first the plank-less rows, then the lanes with most gargantuars, then stall remaining Gargantuars with Hurrikale. 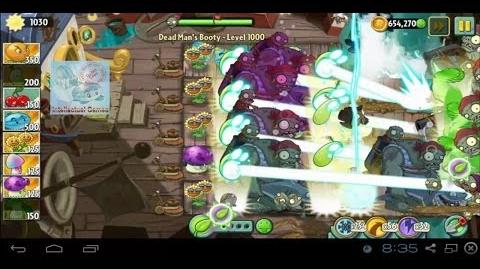 Retrieved from "https://plantsvszombies.fandom.com/wiki/Dead_Man%27s_Booty?oldid=1084075"
Community content is available under CC-BY-SA unless otherwise noted.