Dark Stormy Night is one of the 17 hidden mini-games that can only be accessed using the Cheat Engine. This mini-game is like Level 4-10 of Adventure Mode, where it is dark and lightning flashes. The only differences from the mini-game and Level 4-10 are the plants available and zombies encountered.

It had returned as a Brain Buster of Lost City in Plants vs. Zombies 2 (Chinese version). The plants in these levels were pre-selected. It was first played in Day 8.

PC icon
Add a photo to this gallery

Add three addresses and change all the value to 144.

In this level, you will get Peashooters, Lily Pads, Puff-shrooms, Cacti and Cherry Bombs which come from a conveyor belt. Just use a normal set-up on how you will position your plants, but here are some tips: 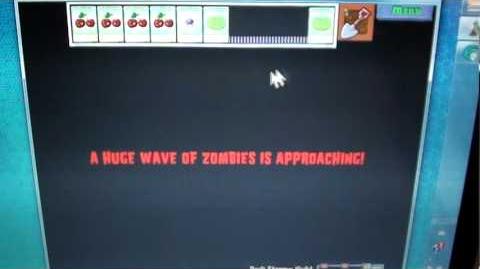 Retrieved from "https://plantsvszombies.fandom.com/wiki/Dark_Stormy_Night?oldid=2288630"
Community content is available under CC-BY-SA unless otherwise noted.