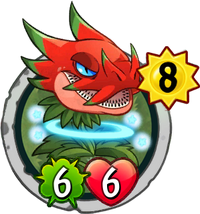 more.
Their ancestors were hunted to the depths of space. Now their descendants are back for cold, fruity vengeance.
Dark Matter Dragonfruit is a galactic legendary plant card in Plants vs. Zombies Heroes and a member of the

. It has the Amphibious and Splash Damage 6 traits, and its ability increases the cost of all zombie tricks by 6

It is based on the pitaya, specifically the white-fleshed pitahaya (Hylocereus undatus), also known as the dragonfruit, the fruit of several different cactus species indigenous to the Americas, and a dragon, a mythical creature with reptilian and sometimes, avian traits, specifically space dragons featured in several science fiction topics.

Its name is combination of "dark matter," a form of matter that is thought to account for approximately 85% of the matter in the universe and about a quarter of its total energy density, referring to it being a Galactic Gardens card, and "dragonfruit," the real-life plant it is based on.

It could be a reference to Dark Matter Dragon from Yu-Gi-Oh, as they have similar names

Its description may be a reference to the Ahamkara from the Destiny series; the Ahamkara were also space dragons hunted to the verge of extinction. Many of their bones seemingly retain consciousness and goad their wearers into recklessness and overconfidence, presumably as a way of revenge.

Their ancestors were hunted to the depths of space. Now their descendants are back for cold, fruity vengeance.

This can be a game-changing card, turning the tide of the battle in your favor. Not only does it have high raw stats, along with the Amphibious and Splash Damage 6 traits, but it also has an extremely powerful ability, namely making all zombie tricks cost 6

more. This makes up for a common weakness to tricks that can destroy plants, especially Rocket Science and Locust Swarm. It can also easily destroy three zombies in just one attack, due to its incredible Splash Damage 6. If you are able to have two Dark Matter Dragonfruits on the field, your opponent has almost no way to play any tricks at all and is forced to only play zombies and environments.

Because of how powerful this can be, you should try hard to protect it, especially since 6 health can be depleted pretty quickly late-game. Playing in on the aquatic lane will keep it relatively safe, but also reduces its Splash Damage effectiveness. You can play this to the left of a powerful zombie like Nurse Gargantuar or Disco-Tron 3000 to destroy them before they attack.

Green Shadow can use stat-boosting cards to help keep it alive and do even more damage (note that increasing its strength does not increase the Splash Damage), or play Umbrella Leaf to make it immune to tricks. Citron and Beta-Carrotina can do an even better job at protecting it with all of their Team-Up plants as well as health-boosting tricks. Rose can make use of plants such as Sun-Shroom and Toadstool to generate more sun, allowing her to play this earlier and making it harder to deal with.

As Nightcap, you can shut down trick decks completely if you play this in Pair Pearadise. Your opponent will be virtually unable to play any tricks since they will all cost 12 more. However, Nightcap does not fare well in the late game, so you may be better off using rush decks instead.

Citron and Beta-Carrotina can use Force Field. You likely won't even have to worry about tricks because they will cost a minimum of 7, though your opponent can destroy it with one of their own.

Take note that although it can easily prevent your opponent from playing tricks, it does not affect environments like Total Eclipse. They can also use Teleportation Zombie instead of Teleport to play zombies in the Zombie Tricks phase. Furthermore, if your opponent is using a highly aggressive rush deck, they can possibly finish the game before it can be played.

This is easily one of the most dangerous plants in the entire game. Besides boasting outstanding stats and traits, its ability prevents you from playing tricks that could destroy it easily, like Rocket Science, for quite a few turns. Also, since plants play second, your opponent can simply play this without letting you know, especially when you have spent a lot of brains on zombies, forcing you to think if your opponent will play it until you find out that they do not have this card. If there are two on the field and you have only tricks, then a loss is almost guaranteed due to the fact that most tricks will cost 12 brains more, and would be nearly impossible to play in most cases. As with expensive finishers, the best way to avoid it is to finish the game before it can be even played.

If you will have to get rid of it,

Deadly zombies are a first option. Combining many zombies with Zombot Sharktronic Sub also works well. You can also play Gargantuars that can survive through Dark Matter Dragonfruit's high damage like Wizard Gargantuar and Wannabe Hero if your Hero's health is 6 or more. While incredibly expensive, playing Zombot 1000 allows you to destroy Dark Matter Dragonfruit instantly, along with all other plants on the field. Alternatively, if you are using a Sneaky hero such as Super Brainz, you can easily Bounce Dark Matter Dragonfruit with Pogo Bouncer, or

Freeze it with Space Pirate or Unthawed Viking.

Beastly heroes have access to Primordial Cheese Shover, which can destroy it for just 4 brains as long as you have a zombie for it to evolve on.

A way to reduce the impact of this plant is by having Gentleman Zombies and Medulla Nebula to give you some brains for tricks, but be careful if they are near Dark Matter Dragonfruit.

Take note that this plant does not affect zombie environment cards, so use them to your advantage. Total Eclipse can lower Dark Matter Dragonfruit's stats if it is on any ground lane while boosting environments like Area 22 can make even a weak zombie deal serious damage to it. The most ideal environment would be Laser Base Alpha, as it is guaranteed to destroy Dark Matter Dragonfruit as long as there is a zombie capable of attacking in its lane.

Teleportation Zombie is also an alternative to teleport zombies without worrying about this plant's ability.